Context: The distribution of uropathogens and their susceptibility pattern to antibiotics vary regionally and even in the same region, they change over time. Therefore, the knowledge on the frequency of the causative microorganisms and their susceptibility to various antibiotics are necessary for a better therapeutic outcome. Aim: The aim was to study the frequency and distribution of uropathogens and their resistance pattern to antibiotics in a tertiary care hospital. Settings and Design: Retrospective study for a period of 1 year from January 2011 to December 2011 in a tertiary care hospital. Materials and Methods: The culture and sensitivity data of the uropathogens from suspected cases of UTI were collected from the records of Microbiology Department for study period. Midstream urine samples were processed for microscopy and culture, and the organisms were identified by standard methods. Antibiotic susceptibility was carried out by KirbyâÂÂBauer disk diffusion method according to Clinical and Laboratory Standards Institute guidelines. Descriptive statistics were used to analyze the data. Results: Of 896 urine samples, 348 (38.84%) samples were positive for urine culture. Escherichia coli (52.59%) was the most common organism followed by Klebsiella. E. coli was least resistant to imipenem (8%) and amikacin (16%) and was highly resistant to coâÂÂtrimoxazole (69%) and ampicillin (86%). Klebsiella species were least resistant to amikacin (26%) and were highly resistant to ampicillin (92%). The overall resistance pattern of antibiotics to uropathogens was the highest to nalidixic acid (79%) followed by coâÂÂtrimoxazole (75%) and ampicillin (72%). Good susceptibility was seen with imipenem and cephalosporins. Conclusion: E. coli is still the most common uropathogen. Nalidixic acid, ampicillin, coâÂÂtrimoxazole, and firstâÂÂgeneration fluoroquinolones have limited value for the treatment of UTI. Sensitivity to imipenem and amikacin are still retained and may be prescribed for complicated UTI. Routine monitoring of drug resistance pattern will help to identify the resistance trends regionally. This will help in the empirical treatment of UTIs to the clinicians.

Urinary tract infections (UTI) are the second most common infections after the infections of the respiratory tract.[1] UTI is the most common in patients with diabetes and in those with structural and neurological abnormalities which interfere with urinary outflow. Nosocomial UTI is also common following catheterization and cystoscopy. The manifestations of UTI may vary from mild asymptomatic cystitis to pyelonephritis and septicemia.[2] Gram‑negative organisms are the most common pathogens involved in UTI, but almost all known pathogens have been incriminated as possible causative agents for UTI.[3,4]

Treatment of UTI constitutes a great portion of prescription of antibiotics. Urinary pathogens have shown a changed pattern of susceptibility to antibiotics, resulting in an increase in resistance to commonly used antibiotics.[5]

Retrospective study on the resistance pattern of uropathogens for 1 year (January 2011 to December 2011) was done from suspected cases of UTI. The culture and sensitivity reports were collected from the records of Microbiology Department for study period. Approval from the Institutional Ethics Committee was obtained prior to the study. A total of 896 urine samples was analyzed for culture and sensitivity. Midstream urine samples were collected in sterile containers. The samples were cultured on blood agar and MacConkey media with a standard loop and were incubated at 37°C overnight. A growth of ≥ 105 colony forming units/mL was considered as significant bacteriuria.

The isolates were identified by Gram‑staining and conventional biochemical methods.[8] Antimicrobial susceptibility was done by Kirby–Bauer disc diffusion method on Mueller– Hinton agar and the interpretations were carried out according to the Clinical and Laboratory Standards Institute guidelines.[9] Antibiotics against which sensitivity was tested included ampicillin, amoxyclav, amikacin, cefotaxime, ceftazidime, imipenem, co‑trimoxazole, ciprofloxacin, levofloxacin, norfloxacin, nalidixic acid, and ofloxacin. All data were tabulated and analyzed. Descriptive statistics were used for analysis, and the results were expressed as frequency and percentage. Microsoft Excel 2007 software was used to analyze the data.

Of 896 urine samples analyzed, 548 (61.16%) were from females and 348 (38.84%) were from males. Of 896 urine samples, 348 (38.84%) samples were positive for urine culture. Escherichia coli (52.59%) was the most common organism followed by Klebsiella, Citrobacter and Staphylococcus aureus. Proteus and Acinetobacter showed the least infectivity pattern accounting only for 1.44% of the organisms isolated. Candida albicans growth was seen in 7.47% of the samples. The pattern of bacterial agents isolated is as shown in Figure 1. 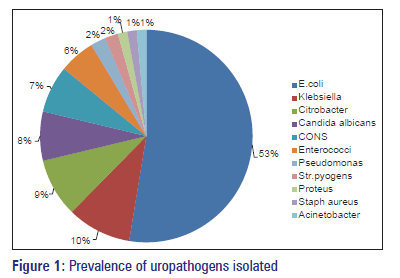 Escherichia coli was least resistant to imipenem (8%) and amikacin (16%), moderate to ceftazidime (36%) and showed high resistance pattern to co‑trimoxazole (69%), fluoroquinolones, and ampicillin (86%). Klebsiella species were least resistant to amikacin (26%), moderate to cephalosporins and fluoroquinolones, and highly resistant to ampicillin (92%). Citrobacter species showed good susceptibility only to Imipenem and moderate susceptibility to the remaining antibiotics. The antibiotic susceptibility patterns of the remaining organisms are shown in Table 1. 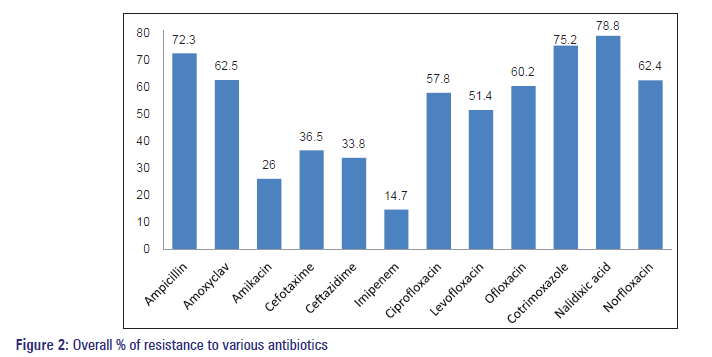 Gram‑negative organisms are the most common organisms causing UTIs, and they collectively account for more than 75% of cases. The spectrum of uropathogens isolated from urine samples in this study is very similar to the studies done in different regions of India and also that reported in the literature.[10]

Escherichia coli is the most common uropthogen accounting for 53% of cases. The incidence of E. coli as a causative pathogen in India varies from 48% to 65% as reported by various studies done earlier.[6,11] Klebsiella is the second most common uropathogen accounting for 10% of cases. The incidence of Klebsiella as uropathogen varies from 8% to 26%.[6,11] Other organisms collectively account for 15–20% of cases. Candida species growth is about 7%. This may be due to increased prevalence of HIV/AIDS, diabetes, and with the indiscriminate use of broad spectrum antibiotics.

There is increased resistance pattern of E. coli to Fluoroquinolones. The similar observations were reported from the studies from other parts of India. This may be due to the widespread use of fluoroquinolones as first‑line empirical therapy for UTIs.

Considerable sensitivity is still retained to imipenem and amikacin due to less use of these injectable antibiotics.

Moderate sensitivity was found with cephalosporins and newer fluoroquinolones.

The resistance pattern to other organisms in our study is similar to the other studies from the different parts of India.[11‑14]

The overall resistance pattern of antibiotics to uropathogens from other studies done in different parts of India is compared in Table 2. From all the studies, it is evident that the uropathogens are least resistant to amikacin and imipenem. This may be due to the less common use of these injectable antibiotics. Moderate resistance is seen with cephalosporins and third‑generation fluoroquinolones. More resistant pattern is seen with ampicillin, amoxiclav, co‑trimoxazole and the first‑ and second‑generation fluoroquinolones. This may be due to the wide use of these antibiotics as empirical therapy for the treatment of UTIs.

The major limitation of the study is that it did not distinguish the distribution of organisms in the community acquired UTI and nosocomial UTI. As a consequence, the prevalence of microorganisms and their resistance pattern in both types of UTI could not be ascertained.

The retrospective study furnished the details about common uropathogens and their drug resistance pattern. From the study, it is clear that, E. coli is still the most common uropathogen. Antibiotics such as nalidixic acid, ampicillin, co‑trimoxazole, and first‑generation fluoroquinolones have limited value for the treatment of UTI. Sensitivity to imipenem and amikacin are still retained and may be prescribed for complicated UTI.

Hence, routine monitoring of susceptibility patterns is necessary. This will help in the empirical treatment of UTI to the clinicians and also for the preparation of antibiotic policy of the individual institute. This will avoid the indiscriminate use of antibiotics and prevent the further development of antimicrobial resistance.

The authors would like to thank the staffs and postgraduate students of the Microbiology Department for their kind co‑operation during the study.

Conflict of Interest: None declared.