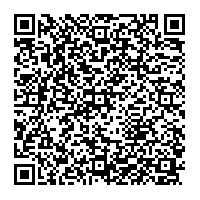 Three major metabolic abnormalities contribute to the development of hyperglycemia in Type 2 diabetes mellitus such as impaired insulin secretion in response to glucose, increased hepatic glucose production and decreased insulinstimulated glucose uptake in peripheral tissues. The latter 2 abnormalities are primarily due to insulin resistance [1,2]. Non insulin dependent diabetic mellitus has also been associated with an increased risk for premature arteriosclerosis due to increase in triglycerides and low density lipoprotein levels. About 70-80% of deaths in diabetic patients are due to vascular diseases. An ideal treatment for diabetes would be a drug that not only controls the glycemic level but also prevent the development of arteriosclerosis and other complication of diabetes.

Cardiovascular disease is one of the leading causes of death in the western world and diabetes mellitus has been identified as a primary risk factor [3], due to which there is alteration in vascular responsiveness to several vasoconstrictors and vasodilators [4]. Hypertension, a component of metabolic/insulin resistance syndrome, is an important risk factor for cardiovascular disease contributing to the increased morbidity and mortality. Oxidative stress and glucose has emerged as an important pathogenic factor in the development of hypertension.

Reactive oxygen species may contribute to the events of atherogenesis and leading to the progression of atherogenic lesions by promoting oxidation of low density lipoproteins [5]. Isoproterenol has been found to cause a severe stress in the myocardium resulting in infarct like necrosis of heart muscles. It also increases the level of serum and myocardial lipids [6] and also increases the level of cholesterol in the tissues which in turn leads to coronary heart disease [7].

Long before the use of insulin became common, indigenous remedies were used for the treatment of diabetes mellitus and hyperlipidemia. There has been an increasing demand from patients for the use of natural products with antidiabetic and antihyperlipidemia and impairment of hepatic and other body functions. The undesirable side effect and contraindications of synthetic drugs, and the fact that they are not suitable for use during pregnancy, have made scientists look towards hypoglycemia agents of plant origin. Many herb antihyperglycemia and antihyperlipidemia actions.

Hesperidin (HES) is an abundant and inexpensive byproduct of Citrus cultivation and isolated from the ordinary orange Citrus aurantium and other species of the genus Citrus (family: Rutaceae). It is reported to have anti-allergic, radio protective, immunomodulator, anti-hypertensive and antioxidant properties. When Hesperidin is administered orally, it is hydrolyzed by intestinal micro flora to yield a major active metabolite Hesperidin.

Hesperidin was obtained from ACROS Lab, US. STZ and NIC were obtained from SIGMA, St. Louis, MO, USA. All other chemicals and reagents used in the study were of analytical grade.

Type 2 Diabetes was induced in rats by a single intraperitoneal (i.p) injection of Streptozotocin (65 mg/kg, STZ) in overnight fasting rats or mice followed by the i.p administration of Nicotinamide (110 mg/kg, NIC) after 15 minutes. STZ was dissolved in citrate buffer (pH 4.5) and NIC was dissolved in normal saline. After 7 days following STZ and NIC administration, blood was collected from retro-orbital puncture and serum samples were analyzed for blood glucose [8]. Animals showing fasting blood glucose higher than 300 mg/dL were considered as diabetic and used for the further study.

Animals were divided into following groups, each group containing 6 animals and the treatment period for whole study was 4 weeks.

All of the data are expressed as mean ± SEM. Statistical significance between more than two groups was tested using one-way ANOVA followed by the Bonferroni multiple comparisons test or unpaired two-tailed student’s t-test as appropriate using a computer-based fitting program (Prism, Graphpad 5). Differences were considered to be statistically significant when p<0.05.

Single intraperitoneal (i.p) injection of Streptozotocin (65 mg/kg) followed by i.p administration of Nicotinamide (1100 mg/kg) to rats produced severe hyperglycemia and increased HbAIc in 70 to 80% the animals.

Effect of Hes on Serum Enzymes 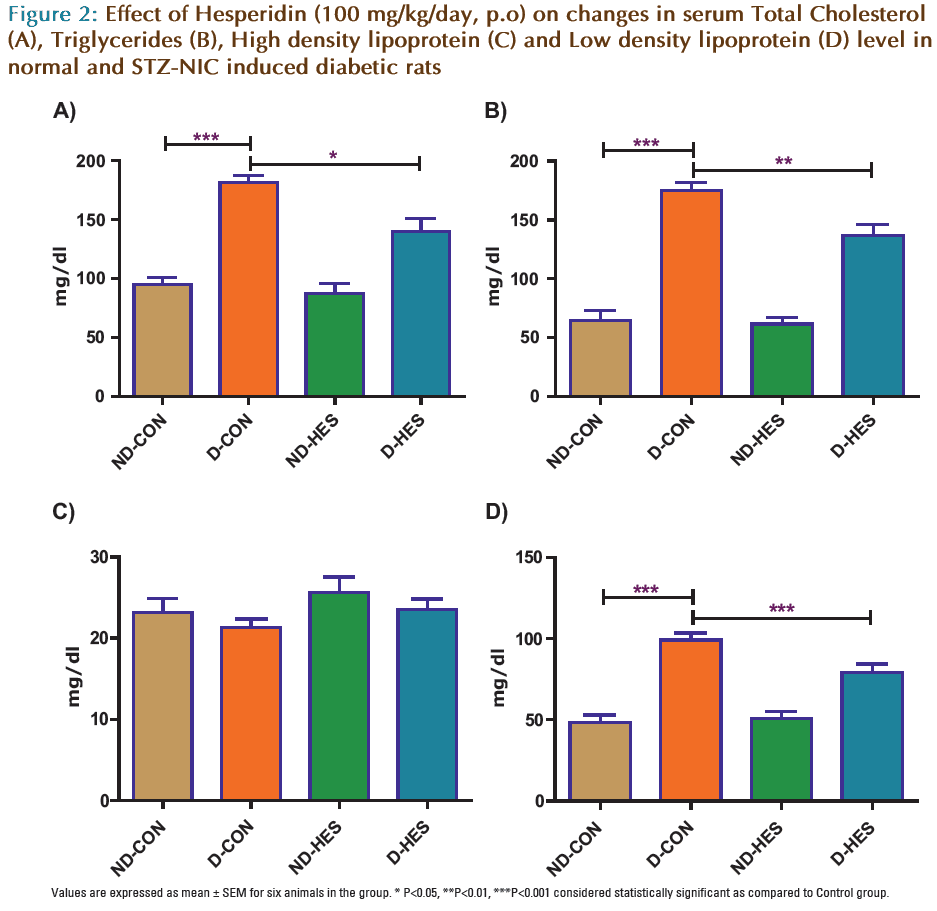 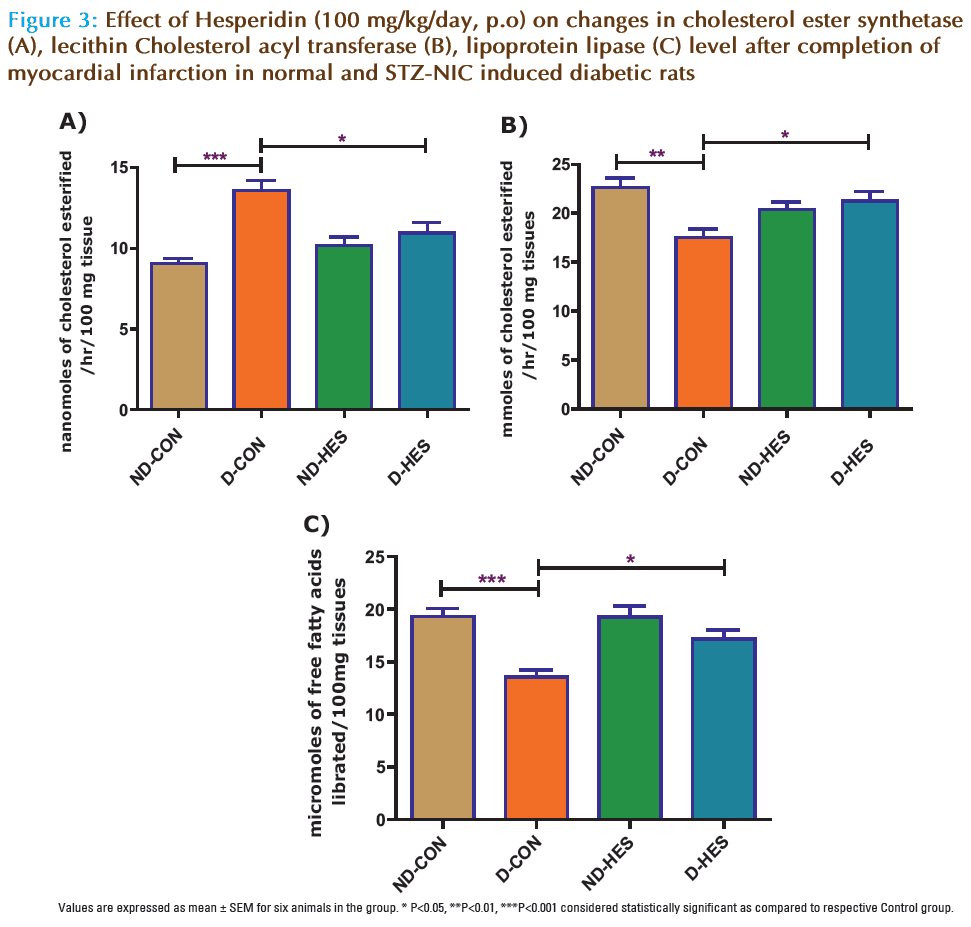 Effect of Hesperidin on systolic and diastolic blood pressure

There was a significant (p<0.01) increase in systolic and diastolic blood pressure after myocardial infarction in D-CON group as compared to ND-CON group (Fig. 4). Treatment of HES in STZ-NIC diabetic rats (D-HES) significant (p<0.05) decrease levels of systolic and diastolic blood pressure as compared to diabetic control (Fig. 4). 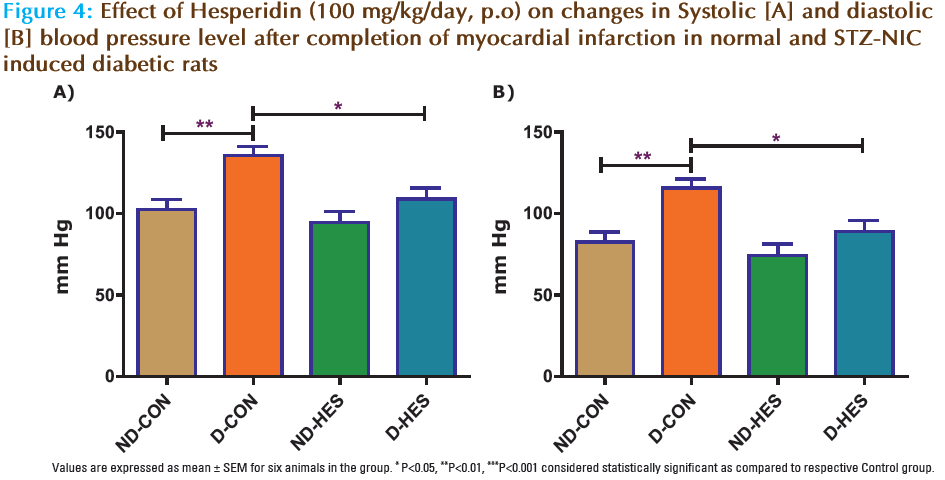 Figure 4: Effect of Hesperidin (100 mg/kg/day, p.o) on changes in Systolic [A] and diastolic [B] blood pressure level after completion of myocardial infarction in normal and STZ-NIC induced diabetic rats

The present study was under taken with the objective of exploring the Hesperidin on lipid profile, diabetic marker and Lipid Metabolizing Enzymes experimentally induced myocardial infarction in diabetic rats.

Diabetes mellitus is a chronic disorder caused by partial or complete insulin deficiency, which produces inadequate glucose control and leads to chronic complication. Premature and extensive arteriosclerosis involving renal, peripheral, and cardiovascular vessels remain the major complication of diabetes mellitus. Alteration in the serum lipid profile is known to occur in diabetes and this is likely to increase the risk for coronary heart disease. A reduction in serum lipids, particularly of the LDL and VLDL fraction and TG, should be considered as being beneficial for the long term prognosis of these patients. Lower of blood glucose and plasma lipid levels thought dietary modification and drug therapy seem to be associated with a decrease in the risk of vascular disease.

Recent studies have suggested that prevalence of type 2 diabetes is rapidly increasing. Patients with diabetes show an increased mortality concerning cardiovascular events. They more often suffer from myocardial infarction as non-diabetics mostly with a more serious course. Moreover, the post-infarction course is affected with a worse prognosis as in nondiabetics [12].

In the present study, an increase in the levels of serum glucose and HbA1c in STZ-NIC treated rats confirmed the induction of diabetes mellitus. Significant decrease was observed in the glucose and HbA1c level in diabetic rats after treatment with HES (100 mg/kg) when compared with D-CON rats at the end of experimental period. STZ causes diabetes by the rapid depletion of β-cells and thereby brings about a reduction in insulin release. HbA1c level has been reported to be increased in patients with diabetes mellitus [13]. It was reported that during diabetes mellitus, the excess of glucose present in the blood reacts with hemoglobin to form HbA1c [14]. The level of HbA1c is always monitered as a reliable index of glycemic control in diabetes [15]. Elevated levels of HbA1c observed in our study reveal that diabetes animals had prior high blood glucose level.

Lipids play an important role in cardiovascular disease, by modifying the composition, structure and stability of cell membranes. Altered lipid metabolism is considered to accelerate the development of atherosclerosis, a major risk factor in myocardial infarction. High levels of circulating cholesterol and its accumulation in heart tissue is well associated with cardiovascular damage [11]. In the present study there was a significant decrease in cardiac LCAT and LPL activity whereas a significant increase in the activity of CES was found in ISO intoxicated rats. HDL is the main substrate for LCAT for cholesterol esterification and incorporation [16].

A significant increase in the level of LCAT in diabetic rats treated with HES. In the present study hypertriglyceridemia observed in ISO intoxicated rats is due to decrease activity of LPL in the myocardium tissues. Accumulation of ester cholesterol occurs when the rate of esterification by cholesterol ester synthetase exceeds the rate of hydrolysis, which in turn results in myocardial membrane damage [17]. HES alter the activities of LCAT, LPL and CES near to the Almost normal, indicating the potential lipid lowering effects of HES.