Phytochemical Screening and Toxicity Studies on the Leaves of Capparis sepiaria Linn. (Capparidaceae)

Capparis sepiaria Linn. (Family: Capparidaceae) is a rare indigenous in South India but has widespread distribution in many tropical and sub-tropical coun-tries. The present study intended with various phytochemical screening and toxicity studies were carried out on the leaves of the Capparis sepiaria. Preliminary phyto-chemical evaluation of the ethanolic extract of revealed that the presence of reducing sugar, flavonoids, steroids, tannins, glycosides, alkaloids, gums, resins, amino acids, proteins and anthraquinones. The toxicity studies were performed as acute, sub-acute and chronic toxicity determined the LD50 value of 300-5000 mg/kg body weight 4-6 weeks. The results of the various phytochemical tests indicated that the plant to be rich in various biologically active compounds which could serve as potential source of the crude drugs and in addition the plant is not toxic to the experimental model.

India is richly endowed with a wide variety of plants having medicinal value. These plants are widely used by all sections of the society either directly as folk remedies or indirectly as pharmaceutical preparation of modern medicine. Phytochemicals with biological activity have had great utility as pharmaceuticals and pharmacological actions. As time goes by the typical western diet seems to increasingly contain more fatty processed foods and less natural plant based foods than ever before. The results of this disturbing trend can be seen in the alarming statistics on cancer, heart disease, stroke and many other degenerative diseases. Aside from the obvious dietary problems of high fat, protein and simple carbohydrate intake is the considerably inadequate intake of plant based foods and all the health giving benefits they bring with them. Many people are aware that eating plant based foods add much needed fiber, vitamins and minerals to the diet but what is less well known is the many benefits of the phytochemicals that these plants contain. Phytochemicals come in a variety of forms and different vegetables have higher concentrations of a particular phytochemical than others. Some of the main phytochemicals include: carotenoids, isoflavonoids, steroids, lignans, anthraquinones, gums and resins. Although it is not important to know the names and benefits of the large range of phytochemicals that exist, what is important is to understand that maintaining a diet that contains a variety of fruits and vegetables will combine the benefits of the phytochemicals and vitamins to help you achieve optimal health. The present study also invented the phytochemicals avail in the medicinal plant known C. sepiaria.

A lethal dose (LD) is an indication of the lethality of a given substance or type of radiation. Because resistance varies from one individual to another, the ‘lethal dose’ represents a dose (usually recorded as dose per kilogram of subject body weight) at which a given percentage of subjects will die. The most commonly- used lethality indicator is the LD50 (or LD50), a dose at which 50% of subjects will die. Animal-based LD measurements are a commonly-used technique in drug research, although many researchers are now shifting away from such methods. The OECD guidelines defined the acute, sub-acute and chornic toxicity of the herbs and modern medicines.

The leaves of C. sepiaria Linn. was collected at Mathur, Tiruchirappalli, Tamil Nadu State and the botanical identification was carried out by Botanical Survey of India, Coimbatore. BSI/ SC/5/23/07- 08/Tech-1551.

80g of the powdered leaf material was extracted with 95% (v/v) ethanol. The extract w as evaporated to dryness on a water-bath. This yield a greenish-black mass referred to as the ethanolic extract of the plant material. The plant has distilled off with distillation apparatus and its yielded 2.5 g of extract, further taken to evaluate the phytoconstituents and toxicology studies.

The ethanolic extract of the leaves of the plant was subjected to various chemical tests in order to determine the secondary plant constituents presents by employing the use of various methods as follows:

To 2 ml of the extract, 5ml of a mixture (1:1) of Fehling’s solution IA and Fehling’s solution II (B) was added and the mixture boiled in a water bath for five minutes. A brick-red precipitate indicated the presence of free reducing sugars (Brain KR, and Turner TD. 1975).

Test for the presence of anthraquinones

0.5g of the extract was shaken with 10 ml of benzene, filtered and 5 ml of 10 percent ammonia solution added to the filtrate. The mixture was shaken; the presence of a pink, red or violet colour in the ammoniacal (lower) phase indicated the presence of anthraquinones (Sofowara A. 1993).

0.5g of the extract was dissolved in a 10 ml of distilled water in a test-tube, the test tube was stopperred with a cork and shaken vigorously for 30 seconds and then allowed to stand for 45 minutes. The appearance of frothing which persists on warming indicated the presence of saponins (Sofowara A. 1993).

To a portion of the dissolved extract, a few drops of 10 % ferric chloride solution were added. A green or blue colour indicated the presence of phenolic nucleus (Brain and Turner, 1975).

0.5g of the extract was dissolved and 2 ml of acetic anhydride and cooled well in ice. Sulphuric acid was then carefully added. A color change from violet to blue to green indicated the presence of a steroidal nucleus (Sofowara A. 1993).

0.5 g of the extract was dissolved in 5 ml of water followed by a few drops of 10 % ferric chloride. A blueblack, green, or blue-green precipitate would indicate the presence of tannins (Sofowara A. 1993).

0.5g of ethanol extract was stirred with 5ml of 1 percent aqueous hydrochloric acid on a stem bath; 1ml of the filtrate was treated with a few drops of Mayer’s reagent and a second 1ml portion was treated with Dragendorff’s reagent. Turbidity or precipitation with either of these reagents would indicate the presence of alkaloids in the extracts (Sofowara A. 1993).

10ml of petroleum ether extract was obtained in a test-tube, the same amount of cupper acetate solution was added and the mixture was shaken vigorously and allowed to separate, a green colour indicates the presence of resin (Trease G. and Evans WC. 1983).

The LD50 was carried out by adopting the method outlined OECD guidelines and A total thrity six were used for these studies. In the initial, three groups were separated and carried six mice each and they were treated with extract at doses of 100, 250, 300, 500, 800, 1000 and 5000mg/kg. They were observed for 24 hours for the acute toxicity studies. In the second phase which is deduced from the first phase, six mice were grouped into three groups and they were treated with doses of 100, 250, 300, 500, 800, 1000 and 5000mg/kg body weight intraperitoneally one month for sub-acute toxicity studies. The chronic toxicity study was carried three months with ethanolic extract of Cappris sepiaria Linn. Also the mice were treated with extract and revealed the toxicity, biochemical changes and observance of the histopathological sections upon the EECS treated mice (OECD guidelines, 2008).

The organoleptic or macroscopic studies yielded important characteristics, such as the fractured surfaces of fresh and dried (leaves, stem, petiole, root, flower, buds, fruit, vegetable and bark), typical tongue sensitizing aromatic taste and characteristic odour of the plant parts; which are useful diagnostic characters may be useful. The plant was identified the morphological characteristics and the toxic substances (Table. 1.) which are presented minutely in the crude drug. The plant exhaustively (Table. 4.) showed that medically useful phytoconstituents in the aqueous and ethanolic extract of Capparis sepiaria. The results of the determinations of the phytochemical tests indicated that the plant possesses numerous biologically active compounds which could serve as potential source of drugs in herbal medicine (Capasso A. et al, 1997). The phytochemicals are flavonoids, reducing sugars, saponins, starch, gums, mucilages presented in the aqueous extract of C. sepiaria. The phytochemicals are alkaloids, flavonoids, glycosides, proteins, reducing sugars, saponins, starch, steroids tannins, mucilages, gums presented in the ethanolic extract of C. sepiaria. On the toxicity evaluation acute, sub-acute and chronic toxicities were showed that the LD50value of 300-5000mg/ kg body weight in mice i.p. signifies the extract to be non-toxic to the experimental model. The EECS treated mice were dissected and assayed the parameters in blood such as blood cholesterol, protein, urea, ACP, ALP. The blood parameters showed in (Table. 3) which possesses the normal values when treated with EECS (5000 mg/kg) as chronic level assessment. Although the cholesterol level changes given the higher value when treated with the EECS and it may concern the EECS stimulate the hyperlipophilic character by the presence of mucilages in the extracts. Also they observed that the extract primitively showed that no danger to any organs as liver and kidney. The histopathological sections all showed that the (Figure. 2.). The acute toxicity studies showed that the liver section of mice treated with EECS showing increased sinuses and greatly dilated with hyperplastic Kupffer cells without any inflammation (Figure. 2.1.) the cytoplasm was extensively vacuolated showing fatty changes (fatty droplets) and further (Figure. 2.4.) showed that histopathology section of mice kidney from EECS treated group with normal tubular and glomerular structures showing slight dilation of renal veins are seen in the cortex no sign of any infiltration and enlargement. The Sub-acute toxicity of histopathological sections as liver and kidney showed in (Figure. 2.2. & 2.5.) respectively. Histopathology section of mice liver showed moderate sinuses and slightly dilated with hyperplastic Kupffer cells and slightly vacuolated showing fatty changes (fatty droplets) showing more or less normal hepatocytes and blood sinusoids and in kidney Tubular and glomerular structures showing hypertrophy of epithelial cells frequently with signs of oedema are seen in the cortex without any damage. In the chronic toxicity was showed in (Figure. 2.3. & 2.6.) further liver showing mild lymphatic infiltration besides the central vein and some cells show dead nuclei and dark stained hepatocytic nuclei indicating hepatocytic nuclear death or cell pycnosis and congestion of the central vein and in the kidney showed renal tubules and glomerular structures showing mild dilation of renal veins and desquamation are seen in the cortex due to the long period treatment on chronic toxicity. EECS no causes any mortality and no violent behaviors in the animals. Those results were concluded the plant has wide range of chemical constituents and has no toxicity and it could use for the various pharmacological actions. 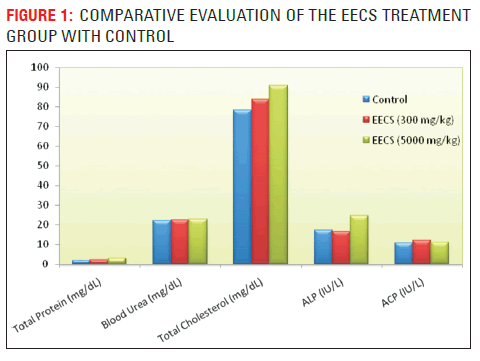 Figure 1: Comparative Evaluation of the EECS Treatment group with control 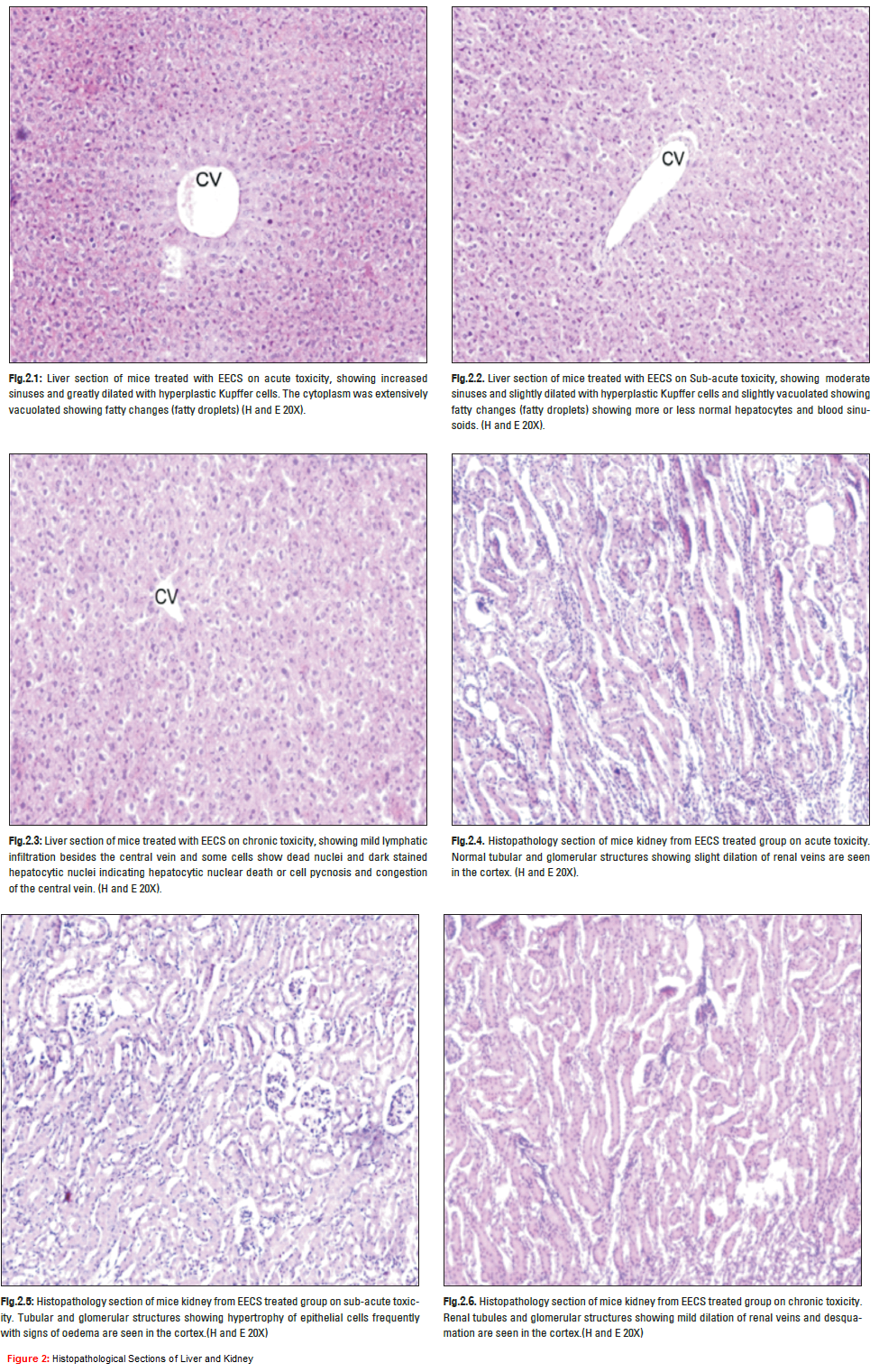 The authors sincere thanks to the funding agencies as DST, New Delhi, TNSCST, Chennai.