High blood cholesterol levels are consistently associated with higher risk of coronary heart disease, and other life-threatening cardiovascular and cerebro-vascular damage, including fatal strokes. In the present study methanolic extract of Annona cherimola was evaluated for its antihyperlipidemic potential. Acute hyperlipidemia was induced by single administration of Triton WR 1339 (Tyloxapol) intra-peritoneally. There was a significant dose dependent decrease in plasma total cholesterol, triglycerides and LDL-cholesterol at the same time considerable increase in HDL-cholesterol levels upon administration of methanolic extract at the dose of 250 mg/kg and 500 mg/ kg. Fenofibrate was used as reference standard. Atherogenic index as well as LDL/ HDL cholesterol ratio was lowered significantly in case of methanolic extract treated groups compared to normal control which reflects the antihyperlipidemic potential of Annona cherimola.

Hyperlipidemia is a state of high lipid profile or high cholesterol levels in the plasma, which can lead to severe health complications like congestive cardiac failure, atherosclerosis and pancreatitis [1]. World Health Organization reports that high plasma cholesterol contributes to approximately 56% of cardiovascular diseases worldwide and causes about 4.4 million deaths each year [2].

Lipid-lowering strategy may have a beneficial role in normalizing vascular function and greatly decreasing the frequency of clinical events associated with atherosclerosis, combined with the ability of antioxidants to alleviate vasomotor disturbances in hypercholesterolemia and to slow the progression of atherosclerosis [3]. Studies on atherosclerosis reveal the probability that the disease may be due to free radical reactions involving diet-derived lipids in the arterial wall and serum to yield peroxides and other substances. These compounds induce endothelial cell injury and produce changes in the arterial walls [4]. Free radicals may contribute to atherogenesis by oxidizing low density lipoproteins (LDLs) which then damage arterial walls. The oxidation of LDL cholesterol is suspected to occur at the initial stages of atherosclerosis, and vitamin E has been shown to inhibit this oxidative reaction [5]. There is evidence that adhesion of monocytes to the endothelium and transformation of macrophages into foam cells, plaque stability, vasomotor function, platelet aggregation and tendency to thrombosis lead to the development of atherosclerosis and coronary artery disease and can be modified by antioxidants [6-7].

Inflammation plays a key role in the development of the atheromatous plaque. Haemostatic factors appear to be involved early in atherogenesis such as factors VII (FVII) and VIII (FVIII), vonWillebrand factor (vWF) and above all elevated levels of fibrinogen [8]. Inflammation is now recognized as an important contributing factor to atherosclerosis and heart disease. Inflammatory molecules stimulate events that lead to the recruitment of white blood cells into the blood vessel wall, where they give rise to abnormal foam cells and initiate the development of atherosclerotic lesions. Inflammation participates in all phases of Atherothrombotic Disease: initial lesion, progression of lesion and thrombotic complications [9].

Thus the desirable medicament must not be confined just to reduce the lipid levels in plasma but also should be efficient to protect from free radical damage and inflammation. There is an increase in interest in finding a plant based compound having both antioxidant as well as anti-inflammatory properties, which could reduce the increased lipid levels in plasma. In our earlier studies methanolic exract of Annona cherimola has showed good antioxidant and anti-inflammatory properties invitro [10]. Therefore we have chosen Annona cherimola to evaluate for antihyperlipidemic activity invivo.

Collection of Plant material and Authentication

Annona cherimola belonging to family Annonaceae has been selected for this study. The plant material was collected from Thirumala forest, Chittor district, Andhra Pradesh, India and authenticated by Dr. Madhava Chetty, botanist, Sri Venkateshwara University, Tirupathi. The leaves were shade dried and ground into coarse powder.

500g of powdered leaves of Annona cherimola was extracted continuously using soxhlet apparatus with methanol at 30°C for about 48 hours. The extract was concentrated under reduced pressure using Rotary vacuum flash evaporator to get a constant volume.

Wister albino adult female rats weighing 120-150g were purchased from National Institute of Nutrition, Hyderabad, India. The animals were grouped and housed in polyacrylic cages and maintained under standard laboratory conditions with dark and light cycle (12:12 hour) and temperature 22±0.5°C. They were allowed free access to standard dry pellet diet (National Institute of Nutrition, Hyderabad, India) and water ad libitum. The rats were acclimatized to laboratory condition for 1 week before commencement of experiment. The experiment was carried out according to the guidelines of the Committee for the Purpose of Control and Supervision of Experiments on Animals and approved by Animal Ethical Committee of Department of Genetics, Osmania University, Hyderabad, India (approval no.380/01/a/CPCSEA).

The animals were divided into five groups of six rats each.

After 6 and 24hours of Triton WR 1339 injection the blood was collected from Retro-orbital plexus of rats in heparised vials. The blood was centrifuged at 3000 rpm for 10 minutes to separate the plasma. Plasma was analyzed for Total Cholesterol, HDLCholesterol, LDL-Cholesterol and Triglycerides using enzyme kits. The Atherogenic index of plasma (AIP) was calculated for each group of rats by using formula 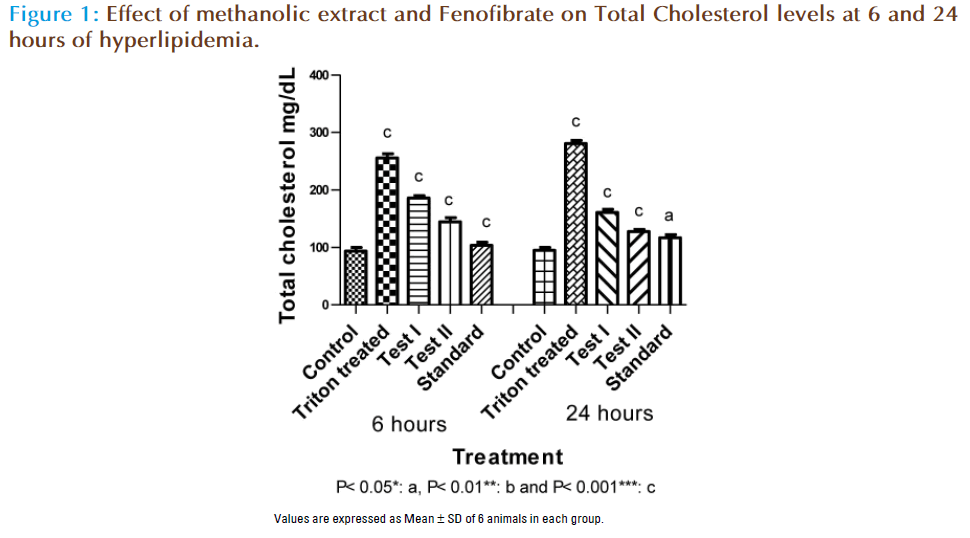 Figure 1: Effect of methanolic extract and Fenofibrate on Total Cholesterol levels at 6 and 24 hours of hyperlipidemia. Figure 2: Effect of methanolic extract and Fenofibrate on Total Triglyceride levels at 6 and 24 hours of hyperlipidemia. 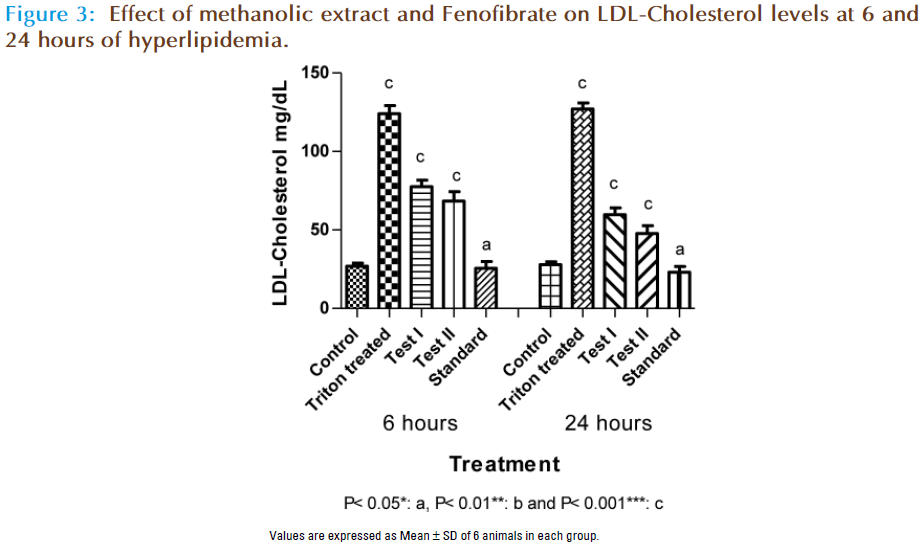 Figure 3: Effect of methanolic extract and Fenofibrate on LDL-Cholesterol levels at 6 and 24 hours of hyperlipidemia. Figure 4: Effect of methanolic extract and Fenofibrate on HDL-Cholesterol levels at 6 and 24 hours of hyperlipidemia.

Table 1: Effect of methanolic extract and Fenofibrate on AIP and LDL-C/HDL-C ratio at 6 hours and 24 hours of hyperlipidemia.

Triton WR 1339 is the non-ionic detergent, induces acute hyperlipidemia consisting of two phases. In phase I, cholesterol levels raise 2-3 times within 24 hours of administration. The increased cholesterol levels decreases nearly to control levels within next 24 hours in phase II. The mechanism of the Triton induced hypercholesterolemia in phase I is thought to be due to increased hepatic synthesis of cholesterol through the ability of Triton to interfere with the uptake of plasma lipids by the tissue [12]. Thus our study was designed to test antihyperlipidemic activity of Annona cherimola within 24 hours of Triton WR 1339 administration as it is used only to induce acute but not chronic hyperlipidemia.

The association of Triglycerides and HDL-Cholesterol in the simple ratio called Atherogenic Index of Plasma (AIP) theoretically reflects the balance between risk and protective lipoprotein forces. It was already reported that AIP was a strong predictor of myocardial infarction [17]. Several epidemiological and clinical studies have found the LDL-C/HDL-C ratio to be an excellent predictor of HD risk and an excellent monitor for the effectiveness of lipid-lowering therapies. Moreover the LDL-C/HDL-C ratio had more prognostic value than LDL-C or HDL-C alone [18]. Our methanolic extract has successfully and significantly reduced the atherogenic index (AIP) as well as LDL/HDL-cholesterol ratio which indicates its protective effect against cardiovascular diseases.

In conclusion, it is quite evident from our results that methanolic extract of Annona cherimola can be considered as a promising natural remedy for hyperlipidemia and these effects may contribute to its antiatherosclerotic activity. However further studies are recommended to trace the active principle responsible and its possible mechanism of action.