Rationale: Draksharishta (DRK) is an Ayurvedic formulation approved by the “National formulary of Ayurvedic Medicine 2011”, of Bangladesh. It is widely available in the Bangladeshi market as an effective preparation to treat lumbago, sciatia and arthritic pain of joints. But there are very scientifÂic evidences available to support their common uses. Objectives: Our present studies make an attempt toward identifying probable antinociceptive and anti-inflammatory effect and its mechanisms of DRK. Findings: DRK, at three doses, (10 mL/kg, 20 mL/kg, and 40 mL/kg) showed no involvement of the CNS in antinociceptive activity of the test drug. Both Carrageenaninduced paw edema and acetic acid writhing tests gave signifÂicant results (P < 0.05), indicating possible peripheral analgesic and anti-infÂlammatory action. Formalin-induced paw- licking test showed that DRK had signifÂicant effect in suppressing infÂlammatory pain (P < 0.05) but not neurogenic pain. Conclusions: Hence our study shows anti-infÂlammatory and peripheral analgesic action for DRK.

World Health Organization (WHO) has stated that up to 80% of the population in many Asian and African countries depend on traditional and complimentary drugs to meet their medical necessities.[1] It is also an extremely attractive business for many drug vendors which often results in misleading claims being made and confusion in the mind of consumers. Persistent continuation of a regimen with one of these drugs which do not have any pharmacological activity, in reality, would seriously aggravate the morbidity of the patients. For these reasons and others, there has been a demand for ensuring the safety and efficacy of some of these traditional/ herbal medicines.[2] Under the status quo, these products are often sold under hyperbolic and outrageous claims without much scientific evidences. [3] In this paper, we analyzed the analgesic and anti-inflammatory property of Draksharishta (DRK), a commonly available herbal product licensed under the Directorate General of Drug Administration (DGDA) of Bangladesh.

Pain has been defined by The International Association for the Study of Pain as an unpleasant sensory and emotional experience associated with actual or potential tissue damage.[4] This process enables an individual to take protective measures, by providing with rapid awareness about threatening or potentially threatening injury.[5] However, if the painful sensation remains after removal of the detectable stimulus, it calls for a regimen for pain management.[6]

DRK is included in the Bangladesh National Formulary of Ayurvedic Medicine 2011 (2nd Ed.).[7] It is primarily indicated in rheumatoid arthritis, lumbago (low- back pain) and sciatica (pain which may arise from compression and/or irritation of one of five spinal nerve roots which give rise to each sciatic nerve).[7] We have used the following in vivo animal models to test the analgesic and anti-inflammatory effect of the test drug: Hot Plate test, Tail Immersion test, Formalin-induced Paw licking, Carrageenan-induced Paw Edema test, Acetic Acid Writhing test.

All reagents and chemicals that were used in the experiments were of analytical grade. DRK was procured from University Ayurvedic Research Centre, Jahangirnagar University, Savar, Bangladesh. Pharmaceutical grade Tramadol, and Diclofenac Sodium were collected from Square Pharmaceuticals Bangladesh Ltd. All other reagents were procured from Sigma Aldrich (USA) unless mentioned otherwise.

Dose and route of administration

0.9% NaCl was administered to the animals per oral (p.o.) at a volume that would not cause any additional psychological or physiological stress to the animals. For experimental purpose 10 mL/kg, 20 mL/kg, and 40 mL/kg doses of DRK were used. The drug proved to be nonlethal at all doses in previous toxicity screening studies.

Maintenance and use of test animals

Healthy Swiss Albino mice (5-6 weeks old, of both sex) weighing 20-25 g and Spraugue-Dawley rats, weighing 130-160 g, were procured from Jahangir Nagar University Animal House. The test subjects were provided with standard rat pellet diet and filtered drinking water ad libitum. This study was approved by an ethics committee of North South University which gave its consent in absolute accordance with the recommendations of the International Association for the study of Pain.[8]

The Hot plate test was performed on the test subjects in a slightly modified version from the one described earlier.[9] The animals were placed on hot plate apparatus (Model-35100, manufacturer-UGO Basile of Italy) maintained at a temperature of 54 ± 0.5°C for a maximum time of 20s per exposure. The control group was administered with 0.9% NaCl p.o. The treatment groups were treated with DRK (10 mL/kg, 20 mL/ kg, and 40 mL/kg p.o.). Naloxone (5 mg/kg i.p.) was administered with DRK (10 mL/kg, 20 mL/kg, and 40 mL/kg p.o.) and Tramadol to four different groups, other than the treatment groups.

The tail immersion test was performed according to the procedures used by Yang et al.,[10] with minor modifications. Briefly, the lower two-third of mouse’s tail was immersed in a constant temperature water bath at 50 ± 0.2°C. The reaction time, i.e., the amount of time it takes the animal to withdraw its tail was measured. DRK (10 mL/kg, 20 mL/kg, and 40 mL/ kg p.o.), Tramadol (10 mg/kg p.o.), and 0.9% NaCl (p.o.) were administered to treatment groups. Naloxone (5 mg/kg i.p.) was administered with DRK (10 mL/kg, 20 mL/ kg, and 40 mL/kg p.o.) and Tramadol to four different groups, other than the treatment groups.

Carrageenan-induced paw edema test was carried out by following the method described previously.[12] Male and female Spraugue-Dawley rats were used. The control rats received 0.9% NaCl p.o. and the experimental rats received DRK (10 mL/kg, 20 mL/ kg, and 40 mL/kg p.o.). Thirty minutes later, the rats were given a subcutaneous injection of 0.05 mL of 1% solution of carrageenan.

The experimental mice were randomly assigned to six groups; each group had eight mice. The formalin test was conducted based on the method of Tjølsen et al.[13] For the formalin test, groups of mice were treated p.o. with NaCl (0.9% w/v) (for control), DRK at three doses (10 mL/kg, 20 mL/kg, and 40 mL/kg p.o.) (for treatment group), Tramadol (10 mg/kg i.p.), and Diclofenac Sodium (10 mg/kg i.p.) (both for positive control). Tramadol was used as the positive control drug for both nurogenic phase and inflammatory phases. Diclofenac Na was used as the positive control drug for the later inflammatory phase.

Naloxone (5 mg/kg i.p.) was administered with DRK (10 mL/kg, 20 mL/kg, and 40 mL/kg p.o.) and Tramadol to four different groups, other than the treatment groups. Percentage inhibition was obtained by using this formula:[14]

In the Hot Plate Test, DRK treatment caused no significant increase in analgesia. In the presence of Naloxone, an antagonist of opioid receptor, the effect of Tramadol was reduced profoundly as shown in Table 1.

Table 1: Effect of DRK on nociceptive responses in the hot plate test

Table 2 shows that the analgesic effect of DRK was also not significant in Tail immersion test. DRK failed to induce any “tail flick antinociceptive” index.

Values are expressed as Mean ± S.E.M. Differences between groups are determined by One-Way Repeated Measures ANOVA followed by post hoc Dunnett test; and then pair-wise comparison tests were done with Bonferroni correction. *P < 0.05 and ‡P < 0.01 compared to the controltreated group

Table 2: Effect of DRK on nociceptive responses in the tail immersion test 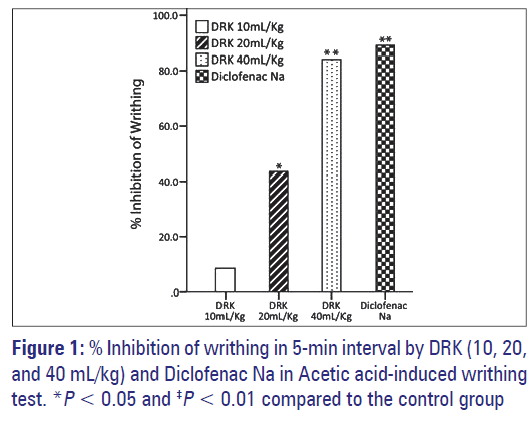 Values are expressed as Mean ± S.E.M. (n = 8). Differences between groups are determined by One-Way Repeated Measures ANOVA followed by post hoc Dunnett test; and then pair-wise comparison tests were done with Bonferroni correction. *P < 0.05 compared to the control-treated group

Table 4: Effect of DRK on nociceptive response in the formalin test

Two well-known models of thermal nociception, hot-plate test and tail immersion test were employed to double check on possible involvement of spinal, supraspinal pathways, and m-opiate receptor agonism in regulation (CNS modulation) of pain response by DRK. Our findings demonstrated no activity of in either model. Hence, probable involvement of the central nervous system, in this case, could be ruled out.

To reinforce the above findings, we employed the formalin induced paw-licking test. This test is capable of discerning between nurogenic pain (early phase, acute, non-inflammatory and CNS modulated) and inflammatory (chronic and peripheral pain).[15-17] The neurogenic pain (first phase) is caused by direct chemical stimulation of nociceptive afferent fibers (predominantly C fibers) which can be suppressed by opiate like morphine.[18] The inflammatory pain (second phase) is caused by the release of inflammatory mediators like histamine, prostaglandins, bradykinin, serotonin in the peripheral tissues,[19] and from functional changes in the spinal dorsal horn.[20] Our results showed that DRK had no effect on neurogenic pain suppression (first phase) but had effective antinociceptive effect in the peripheral inflammatory (second phase) pain. Cotreatment with naloxone partially blocked the activity of Tramadol in both the phases while that of DRK and Diclofenac Sodium remained unaffected. Hence, we have definitive evidence to conclude that DRK has no CNSmodulated pain suppression activity; however, probably has significant peripheral analgesic and anti-inflammatory effect.

To further ascertain its anti-inflammatory activity, we performed the Acetic Acid-induced writhing test and carrageenan-induced paw edema test. Carrageenan-induced edema is commonly used as an experimental model for acute inflammation, and is proven to be biphasic.[21] The early phase (1-2 hours) of the carrageenan model is chiefly mediated by serotonin and histamine release and increased synthesis of prostaglandins in the damaged paw tissues. These induce inflammation and paw swelling. The later phase is sustained by prostaglandin release and is also mediated by bradykinin, leukotrienes, poly-morphonuclear cells, and prostaglandins produced by tissue macrophages.[22] DRK showed, in a dosedependent manner, significant peripheral analgesic activity at the end of the early phase (2h) and throughout the later phase indicating its possible ability to hinder endogenous synthesis or release of inflammatory mediators such as prostaglandins, histamine, serotonin, bradykinin and leukotrienes.

The acetic acid induced writhing test was carried out to confirm the peripheral analgesic activity of DRK. The acetic acid used in this test increased the prostaglandin level (mainly PGE2) in the peritoneal fluid of the mice. [23] Prostaglandins induce abdominal constriction by activating and sensitizing the peripheral chemo-sensitive nociceptors[19] which are mostly responsible for causing inflammatory pain.[24] In our study, DRK, significantly attenuated the writhing in mice in response to acetic acid administration (i.p.), although to a slightly lesser extent compared to the highly potent diclofenac sodium. Hence, the analgesic and anti-inflammatory action of DRK can be attributed to reduction of peripheral nociception by inhibition of prostaglandin release.

In summary, our present study has successfully elucidated the likely mechanism of antinociceptive and anti-inflammatory effect of Draksharishta. We have drawn a sound conclusion that DRK does not have any CNS-modulated effect in pain inhibition, based on three different in vivo models. Its peripheral analgesic activity has been also repeatedly confirmed by three in vivo models. Through this study, it is apparent that the mechanism of action of DRK is similar to that of the commonly used NSAIDs. Hence, its traditional use in arthritis, sciatia, and lumbago held the test of time, not by its mere placebo effect but by some potent analgesic and anti-inflammatory molecules hidden in this age-old Ayurvedic concoction. We believe further studies are required to elucidate the complete pharmacological profile of this potential analgesic preparation for safer and more effective use.