Free radicals arising from metabolism or environmental sources interact continuously in biological systems and their uncontrolled generation corre- lates directly with molecular level of many diseases [1]. Lots of research has clearly showed that free radicals would damage nearby structures including DNA, proteins or lipids. Radical scavenging antioxidants are particularly important in antioxidative defence in protecting cells from the injury of free radical [2]. Me- dicinal plants contain a variety of bioactive substances which are of considerable use against various diseases. The demand for natural food ingredients has resulted in extensive research on naturally occurring antioxidants [3] which can neutralize highly reactive free radicals.

Recently, research on phytochemicals and their effects on human health have been intensively studied. Terpenoids and isoprenoids are a structurally diverse group of natural products. More than 25,000 representatives with a variety of biological functions have been reported in the plant kingdom [4] and structurally diverse groups of secondary metabolites. Several compounds belonging to the class of terpenes have been reported to possess antioxidant properties, such as, monoterpenes hydrocarbons (mycene, terpinolene, pinene), oxygenated monoterpenes (nerol, geraniol, linalol, thymol), sesquiterpene hydrocarbons (humulene, valencene, calarene), oxygenated sesquiterpenes (trans-trans-farnesol, farnesol, farnesyl acetate, guaiol), diterpene hydrocarbons (phytol, abetine), and tetraterpene hydrocarbons (caratenoids) [5,6]. From clinical studies, it is shown that terpenoids can increase the concentration of antioxidants [7].

The powder soaked in n-hexane solvent was kept in the shaker for 48 h at room temperature. The extract was collected and concentrated at 40°C under reduced pressure using rotary evaporator. The dried extract was stored at 4°C until further use. The remaining residue was extracted again with the fresh solvent to ensure complete extraction.

The free-radical scavenging activity of n-hexane extract of Emilia sonchifolia was tested by their ability to bleach the stable radical DPPH. The antioxidant activity using the DPPH (1, 1-diphenyl-2-picrylhydrazyl) assay was assessed by the method of Blois [11]. The reaction mixture contained 100 μM DPPH in methanol and different concentrations (200-1000 μg/ml) of the extracts. Absorbance at 517 nm was determined after 30 min at room temperature and the scavenging activity were calculated as a percentage of the radical reduction. Each experiment was performed in triplicate. Butylated Hydroxyl Toluene (BHT) was used as a reference compound.

The measurement of superoxide scavenging activity of the n-hexane extract of Emilia sonchifolia is based on method as described by Liu [12] and is .assayed by the reduction of nitroblue tetrazolium (NBT). Tris HCl buffer (3 ml, 16 mM, pH 8.0) containing 1 ml NBT (50 μM) solution, 1 ml NADH (78 μM) solution and a sample solution of extract (200-1000 μg/ml) in water were mixed. The reac- tion was started when 1 ml of phenazine methosulfate (PMS) solution (10 μM) was added to the mixture. The reaction mixture was incubatedat 25 °C for 5 min, and the absorbance was read at 560 nm against the corresponding blank samples. Quercetin was used as a reference drug. Decreased absorbance of the reaction mix- ture indicated increased superoxide anion scavenging activity.

The results were expressed as mean±SD of three parallel measurements. The sta- tistical comparison among the groups were performed with one way ANOVA test using a statistical package program (SPSS 10.0) at p<0.05 significant level.

1.5 μl of hexane extract were loaded as 6mm band length in the 3 x 10cm Silica gel 60F254 TLC plate using Hamilton syringe and CAMAG LINOMAT 5 instrument. The samples loaded plate was kept in TLC twin trough developing chamber (after saturated with Solvent vapor) with respective mobile phase (Terpenoid) and the plate was developed in the respective mobile phase (n-Hexane-Ethyl acetate (7.2: 2.9)) up to 90mm. The developed plate was dried by hot air to evaporate solvents from the plate. The plate was kept in Photo-documentation chamber (CAMAG REPROSTAR 3) and captured the images at White light, UV 254nm and UV366nm. Derivatization: The developed plate was sprayed with respective spray reagent anisaldehyde sulphuric acid reagent and dried at 100° C in hot air oven. The plate was photo-documented in Day light mode and UV 366nm mode using photo-documentation (CAMAG REPROSTAR 3) chamber. Scanning: After derivatization, the plate was fixed in scanner stage (CAMAG TLC SCAN- NER 3) and scanning was done at 500nm.

The most prominent and generally toxic ROS are produced after infections and during inflammations by several types of inflammatory cells, e.g. neutrophils. Stimulated neutrophils release superoxide which at physiological pH undergoes dismutation to form H2O2 and O2. ROS may damage surrounding tissue and so contribute to different clinical pictures or diseases such as inflammatory processes or atherosclerosis [16]. Hydrogen peroxide itself is not very reactive, but it may induce hydroxyl radicals, which would result in great damage to cells [17]. Superoxide anion is a relatively weak oxidant, but it can generate more dangerous species including singlet oxygen and hydroxyl radicals, which could cause the tissue damage [18].Therefore, it is important to discover some chemicals with good scavening capacity on these reactive oxygen species. In this study, n-hexane extract of Emilia sonchifolia exhibited appreciable scavenging power and the terpenoids as the characteristic constituents may play a significant role. (Figure 2 and 3). Terpenoids have been shown to possess antioxidative properties in different situations [19] particularly against lipid peroxidation as a result of their high lipophilicity. The antioxidant activity of terpenoids is conferred by the hydrophobic chain of polyene units that can quench singlet oxygen, neutralize thiyl radicals and combine with and stabilize peroxyl radicals [20]. The n-hexane extract of Emilia sonchifolia having the potentiality to scavenge the free radical contains terpenoids which was analysed by using HPTLC. The peak table, peak display and peak densitogram were noted. Blue-violet colored zones were detected from the chromatogram after derivatization which confirmed the presence of terpenoid (Figure 4). Thus, the presence of terpenoids in the n- hexane extract of the whole plant of Emilia sonchifolia was confirmed by HPTLC analysis. The extract was run along with the standard terpenoid compound and it was observed that the extract showed the presence of presence of terpenoid and it was confirmed from the chromatogram after derivatization. The Rf value of the different compounds present in the extract was found to be 0.01, 0.06, 0.47, 0.75, 0.81, 0.87 and 0.96 of peak 1, 2, 3, 4, 5, 6, and 7 respectively. Among them peaks 2, 4, 6 and 7 were found to contain terpenoids. The peak height of the respective terpenoid was also given in the Figure 5 and 6; Table 1. 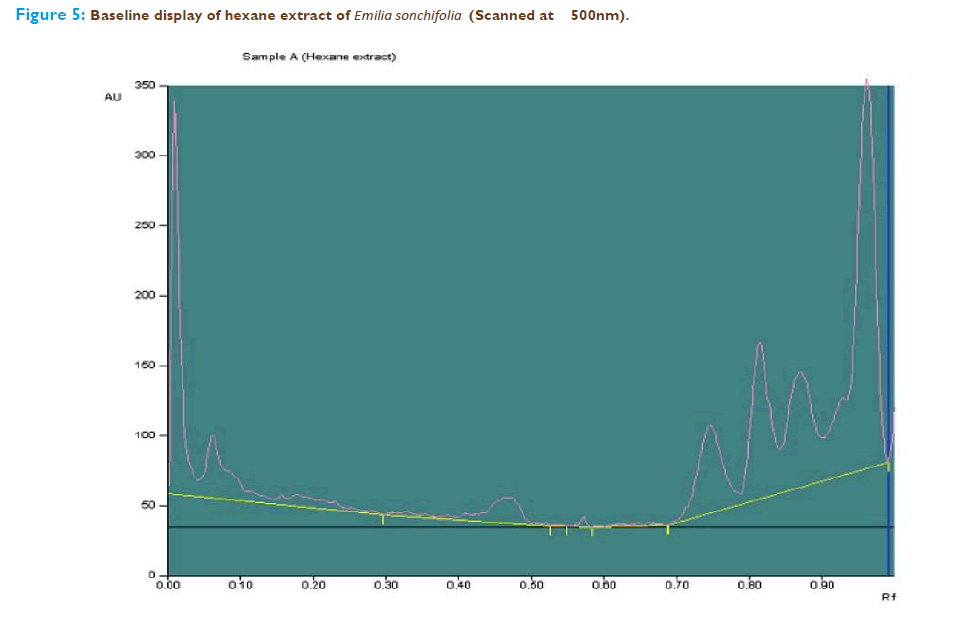 Thus the results of the present study revealed the scavenging capacity of the n- hexane of Emilia sonchifolia and hence can be used as an antioxidant source against various diseases. This may be due to its active phytochemical constituent, terpenoid. Further, isolation and structure of the active constituent is needed which is under progress.

We, the authors are thankful to our Chancellor, Advisor, Vice Chancellor, and Registrar of Karpagam University for providing facilities and encouragement.