Under-reporting of ADR may be associated with poor knowledge, attitudes and practices to pharmacovigilance. This study evaluated knowledge, attitudes and practices of healthcare professionals about ADR monitoring and reporting following interventions. This longitudinal study included 36 healthcare professionals participating in ART program in a tertiary hospital. Interventions included group training on pharmacovigilance (PV) and provision of ADR reporting forms amongst others. Assessments were conducted at months 0 and 6 post-interventions using study-specific Likerttype instruments. Mean attitude scores above midpoint of 3.6 on 5-point scale were regarded as positive and below as negative. P<0.05 used to determine statistical significance. Mean age of participants was 36.6 (95%CI, 34.5–38.7) years; 61.1% males; 44.4% doctors, 13.9% pharmacists, 19.4% nurses, 8.3% laboratory scientists, 8.3% record officers and 5.6% welfare officers. None had received training on PV previously. Mean knowledge test score increased from 53.6% (95%CI, 44.6–63.6) at pre-intervention to 77.1% (95%CI, 72.8–81.4) at post-intervention with a mean change of 146.9% (95%CI, 60.5–233.3; p=0.000). Mean rated attitude scores increased from 3.6 (95%CI, 3.4–3.8) at pre-intervention to 4.2 (95%CI, 4.0–4.4) at post-intervention; the difference was statistically significant (p=0.000). 75.8% reported that ADR reporting forms were not readily available at pre-intervention compared to 18.2% at postintervention; 15.2% had reported ADR previously at pre-intervention compared to 69.7% at post-intervention; 12.1% reported providing information regarding ADRs and its management always at pre-intervention compared to 45.5% at post-intervention; these differences were statistically significant (p<0.05). Lack/inadequate knowledge, unavailability of reporting forms and negative attitudes were barriers identified; and addressing them resulted in significant improvement in this setting. Scaling up these interventions to other hospitals can better the situation of under-reporting of ADRs in Nigeria.

Antiretroviral therapy (ART) is usually a triple combination regimen of two nucleoside reverse transcriptase inhibitors (NRTIs) plus one non-nucleoside reverse transcriptase inhibi- tors (NNRTIs) or protease inhibitors in Nigeria. ART has been shown to maximally and durably suppress viral replication, and restore and/or preserve immune function as reflected by CD4 cell measures, thereby sig- nificantly reducing morbidity and mortality associated with HIV infec- tion, improving quality of life of HIV-infected patients and reduce risk of HIV transmission [1, 2]. However, ART is also associated with toxicities from the individual antiretroviral drugs in the regimen like any other drugs. Anaemia, hepatotoxicity, vomiting, peripheral neuropathy, diar- rhoea, dizziness, paraesthesia, bad dreams and skin rash were common ADRs observed in patients on ART [3-6]. Other toxicities include lipod- ystrophy, lactic acidosis, and hyperlipidemia amongst others. These drug- induced toxicities not only have the potential to diminish quality of life of the patients but can adversely affect treatment adherence by patients’ re- fusal to take any ART for fear of toxicity [7-9]. Poor adherence to ART is associated with development of drug-resistant human immunodeficiency virus, increased disease progression and virologic failure; consequently, morbidity and mortality as well as the burden on health care increases [10-12]. WHO defined pharmacovigilance as ‘‘science and activities relat- ing to the detection, assessment, understanding and prevention of adverse effects or any other drug related problems’’. The ultimate goal of pharma- covigilance is to ensure safe and rational use of medicines, and prevent avoidable negative consequences of pharmacotherapy in patients [13]. Pharmacovigilance programs have led to regulatory decision to withdraw of several approved and licensed drugs from the market because of drug- induced toxicities [14, 15]. However, under-reporting of adverse drug reactions (ADRs) is one of the major problems associated with pharma- covigilance programs. Recent studies provided evidence of significant and widespread under-reporting of ADRs to spontaneous reporting systems including serious or severe ADRs [16]. It is likely that less than 10% of serious reactions are reported [14, 17]. In many countries including Ni- geria, the reporting rates are likely to be much lower [18]. Studies con- ducted in different settings including Nigeria reported poor knowledge, attitude and practices to ADR monitoring and reporting among health- care professionals [18-28]. High patient load, indifference, unavailability and/or inaccessibility of the ADR reporting form, lack of incentives for the reporters, not knowing what to report or even who should report and fear of allegation for reporting errors were factors that may responsible for the low reporting rates. Sometimes healthcare professionals fear that the acknowledgement of adverse reactions may reflect negatively on their competence or put them at risk of litigation. Some are reluctant to report adverse reactions because of doubts regarding the causal role of the drug. The commonest factors that militate against ADR reporting were lack of knowledge, unavailability of reporting forms, ignorance of the reporting procedure and indifference to ADRs reporting [18, 24, 25]. Majority of health workers were willing to practice pharmacovigilance if they are trained [25, 26].

It is vital that the safety of all medicines is monitored throughout its clinical use. Clarity of criteria for reporting, simple procedures and good motivational practice may be influential in addressing the problems in some if not all settings [29]. Improving the knowledge, attitudes and practices of healthcare professionals regarding ADR monitoring and reporting can better the situation of under-reporting of ADRs. This study evaluated the change in knowledge, attitudes and practices of healthcare professionals about ADR monitoring and reporting after six months of capacity building interventions in a Nigerian tertiary hospital.

The study was conducted in Federal Medical Center (FMC) Owo, Ondo State, Nigeria. This is a 300 bed-capacity tertiary health facility and serves both insured and uninsured members of the general public within and outside the State. HIV comprehensive care services including ART are provided at no cost to the patients with funding support from PEPFAR through USAID. The healthcare professionals involved in the ART program were trained on HIV Comprehensive Care Services based on the Nigerian National HIV/AIDS treatment guidelines at commencement. The training package included topics as adverse effects of antiretroviral drugs without emphasis on ADR monitoring and reporting.

The interventions included a five–day group training of the healthcare professionals (doctors, pharmacists, laboratory scientists, nurses, medical record officers and social welfare officers) on clinical pharmacovigilance for antiretroviral drugs using a standardized training manual available at: http://www.nafdac.gov.ng/index.php?option=comdocman &task=catview&gid=53&Itemid =57. The training was facilitated by the researchers and three trained assistants. A multidisciplinary Hospital- based ART Pharmacovigilance Committee (HAPC) that included medical doctors, pharmacists, nurses, medical record officer, laboratory scientists and social welfare officers was constituted and inaugurated by hospital management. HAPC was mandated to coordinate pharmacovigilance of antiretroviral drugs in the health facility. HAPC holds monthly feedback and safety data review meetings; and follow up patients with individual case safety reports (ICSRs) and submit to ICSRs to the National Pharmacovigilance Center. Standard Operating Procedure (SOP) for detection, evaluation and reporting ADRs related to ART that included the ADR screening form and a flowchart for ADR monitoring and reporting was disseminated and adopted by the health facility. The national ADR reporting form (the yellow form) was also provided for reporting of suspected ADRs (ICSRs) to the National Pharmacovigilance center at NAFDAC. The copies of ADR screening and reporting tools were deployed to all service delivery points through the hospital medical record system. The healthcare workers were also trained on the use of the job aids and tools. No monetary incentive was provided to the health workers involved in the study. After interventions, there was a monthly follow up monitoring of hospital pharmacovigilance program and provision of technical assistance as appropriate by the researcher.

The study site was selected using purposive sampling technique. The population for the study included all 36 healthcare professionals (16 medical doctors, 5 pharmacists, 7 nurses, 3 laboratory scientists, 3 medical record officers and 2 social welfare officers) participating in the ART program. All the healthcare professionals participating in the ART program were purposively selected for the study.

Validity and Reliability of Instrument

The study-specific knowledge, attitude and practices (KAP) questionnaire was circulated to the technical experts and a biostatistician. It was discussed objectively and modified based on the feedbacks for content validity. In addition, it was pre-tested which also provided opportunity for the modification and validation of the study instrument. The site and participants involved in the pre-testing of the instrument were not included in the main study to avoid bias. The characteristics of the healthcare professionals used in the pre-testing were similar to the selected study participants.

The ethical approval for this study was obtained from National Health Research Ethics Committee (NHREC), Abuja, Nigeria. Informed consent of the participants was also obtained. Confidentiality was assured by excluding participants’ identifier during analysis.

Predictive Analytics SoftWare (PASW) statistics-18 software was used for data analysis. The responses including those on 5-point Likert scales were analyzed using descriptive statistics on the sample characteristics and questionnaire items. Likert rating scale was anchored as follows: strongly agree = 5, agree = 4, neutral = 3, disagree = 2, and strongly disagree = 1 or always = 5, most of the time = 4, neutral = 3, rarely = 2, and never = 0; negatively worded items were reverse coded so that higher scores represent higher knowledge, attitudes and practices. Factor analysis was performed using principal components extraction. Missing values in the factor analysis was handled using listwise deletion. Factors selected had eigenvalues greater than 1. Items with factor loadings ≥0.40 were considered significant, and loadings ≥ 0.50 were considered “very significant” [30]. Mean item scores were computed for the individual attitude items. Paired samples t-test was used to compare the participants’ knowledge, attitude and practice before and after interventions. One sample t-test was used to compare participants’ attitudes within group. A midpoint of 3.6 was used for the 5- point scale which was determined by adding all the scores and computing the average. Mean attitude scores above the midpoint of 3.6 were regarded as positive attitude while scores below this mid-point were regarded as negative attitude. The reliability analysis was determined using Cronbach’s alpha. All reported P values were 2-sided and P<0.05 used to determine statistical significance.

Knowledge of the participants before and after the training intervention

Of the 36 participants who completed the pre-training knowledge evaluation, only 35 (97.2%) of them completed the post-training knowledge evaluation. The participants’ mean pre- test score was 53.6% (95%CI, 44.6–63.6) which increased after the training to a mean post-test score of 77.1% (95%CI, 72.8–81.4); and the mean percent knowledge change was 146.9% (95% CI, 60.5–233.3). The knowledge increase was statistically significant (p=0.000). None of the participants reported to have received training on pharmacovigilance previously, except the pharmacists who remarked that some pharmacists in the pharmacy department had received a training that included management of ADRs related to antiretroviral drugs as a topic in a broader Pharmaceutical Care in HIV training package.

Participants’ Evaluation of the Training workshop

Attitudes and Practices of Health Workers about ADRs monitoring and reporting 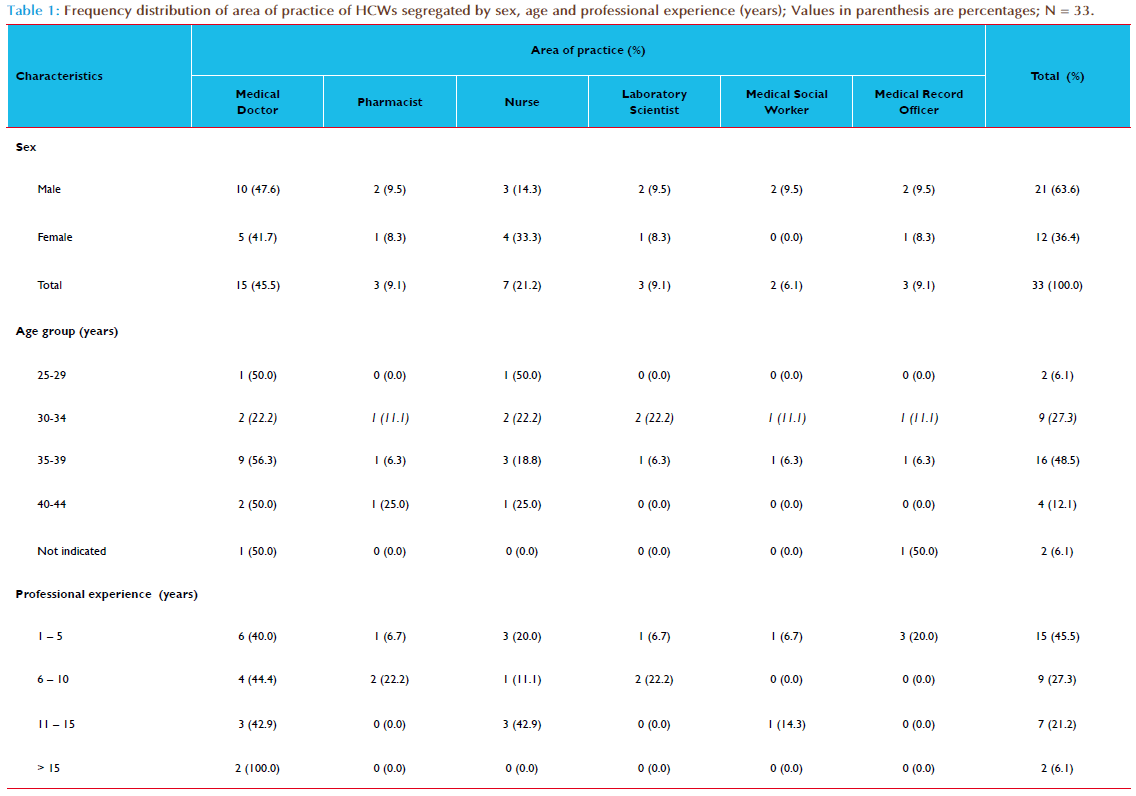 Table 1: Frequency distribution of area of practice of HCWs segregated by sex, age and professional experience (years); Values in parenthesis are percentages; N = 33. 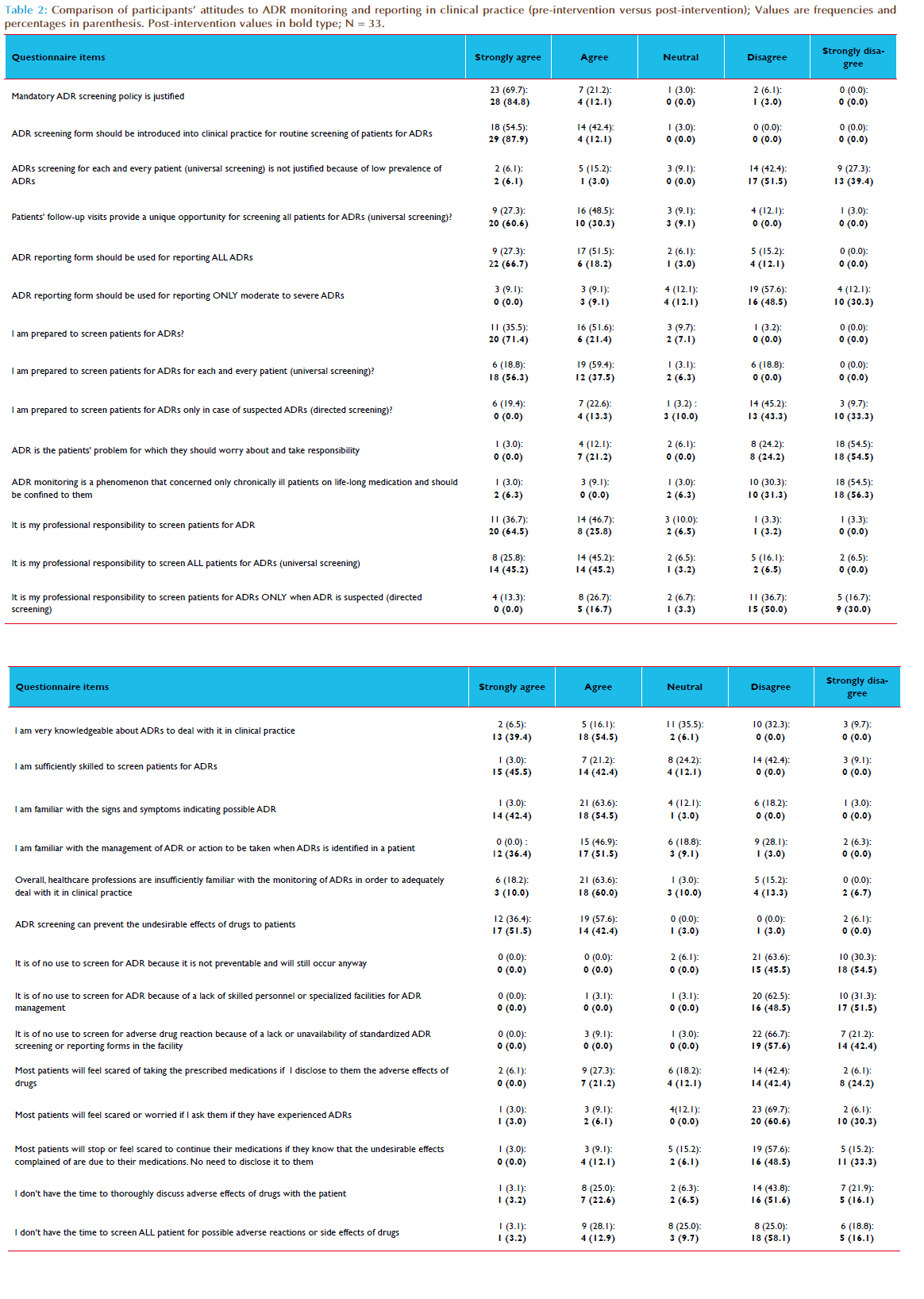 Table 2: Comparison of participants’ attitudes to ADR monitoring and reporting in clinical practice (pre-intervention versus post-intervention); Values are frequencies and percentages in parenthesis. Post-intervention values in bold type; N = 33. 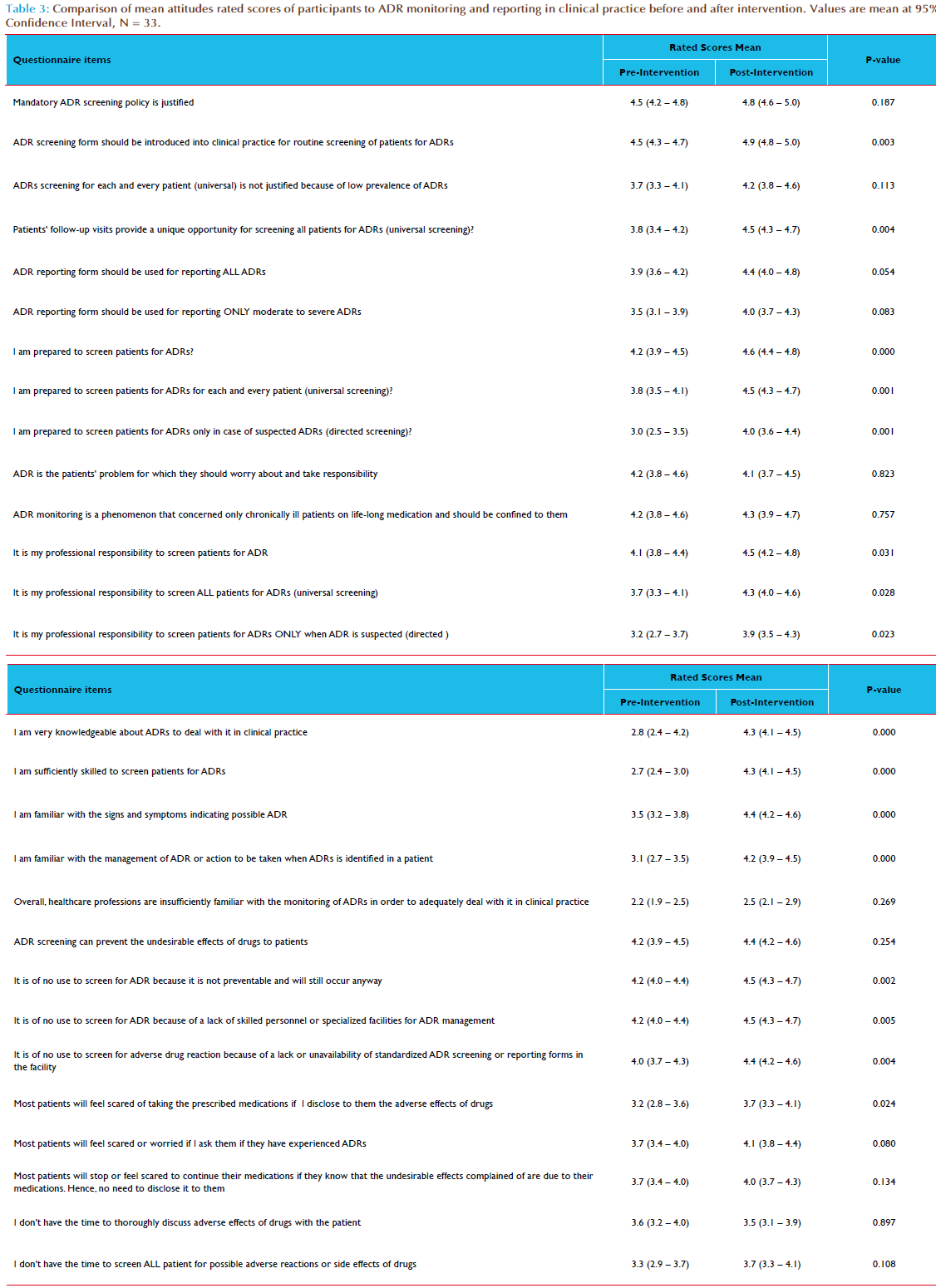 Table 3: Comparison of mean attitudes rated scores of participants to ADR monitoring and reporting in clinical practice before and after intervention. Values are mean at 95% Confidence Interval, N = 33. 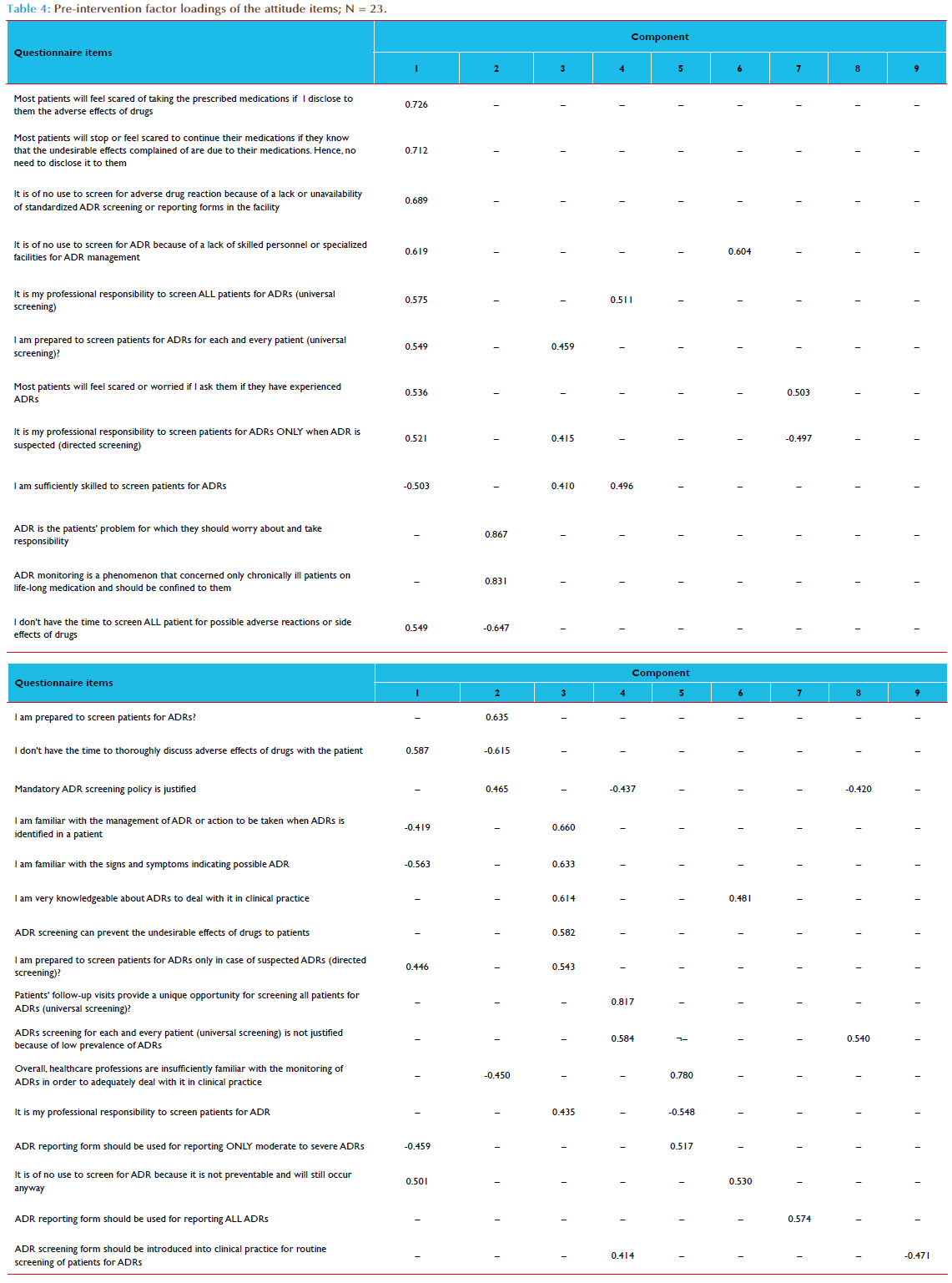 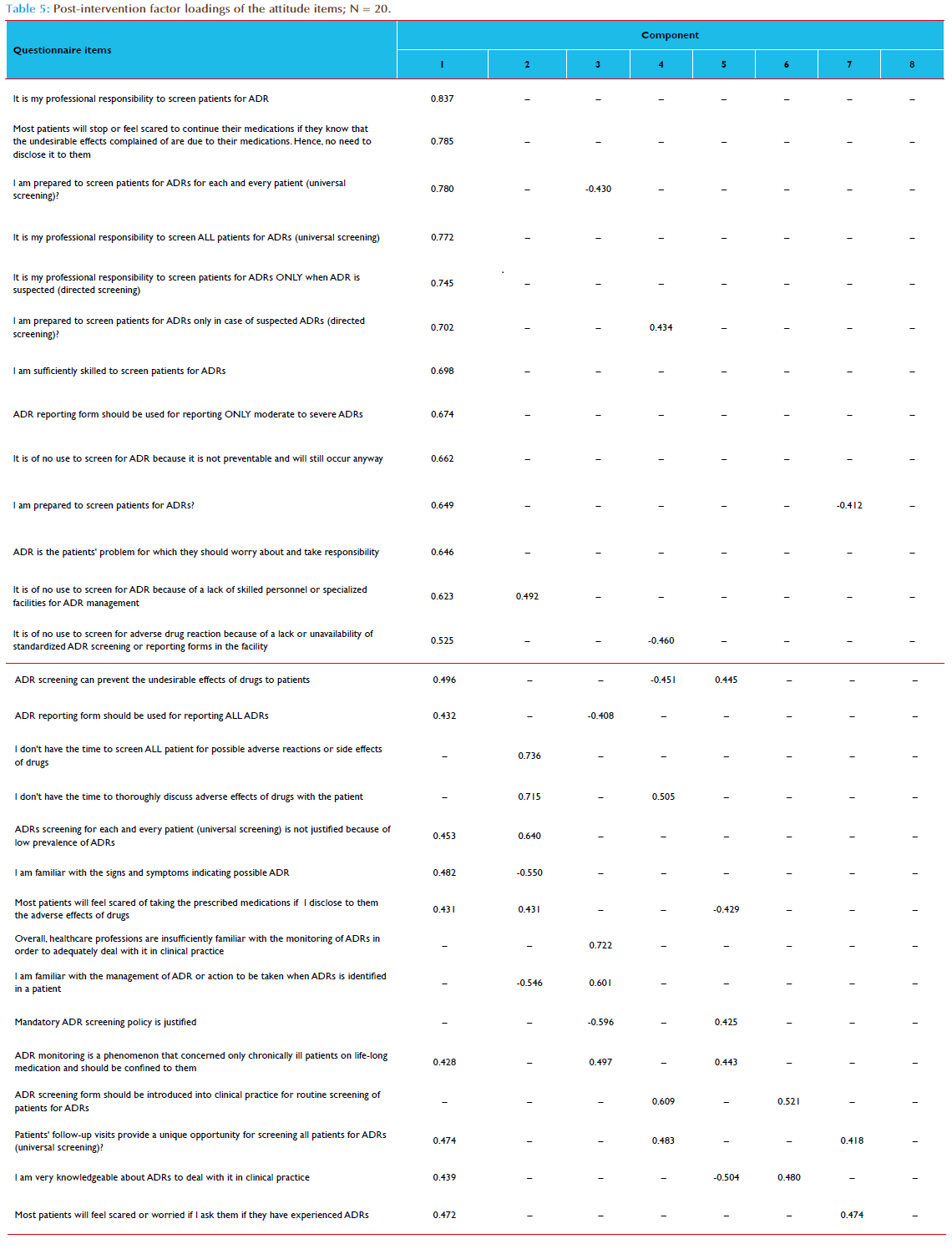 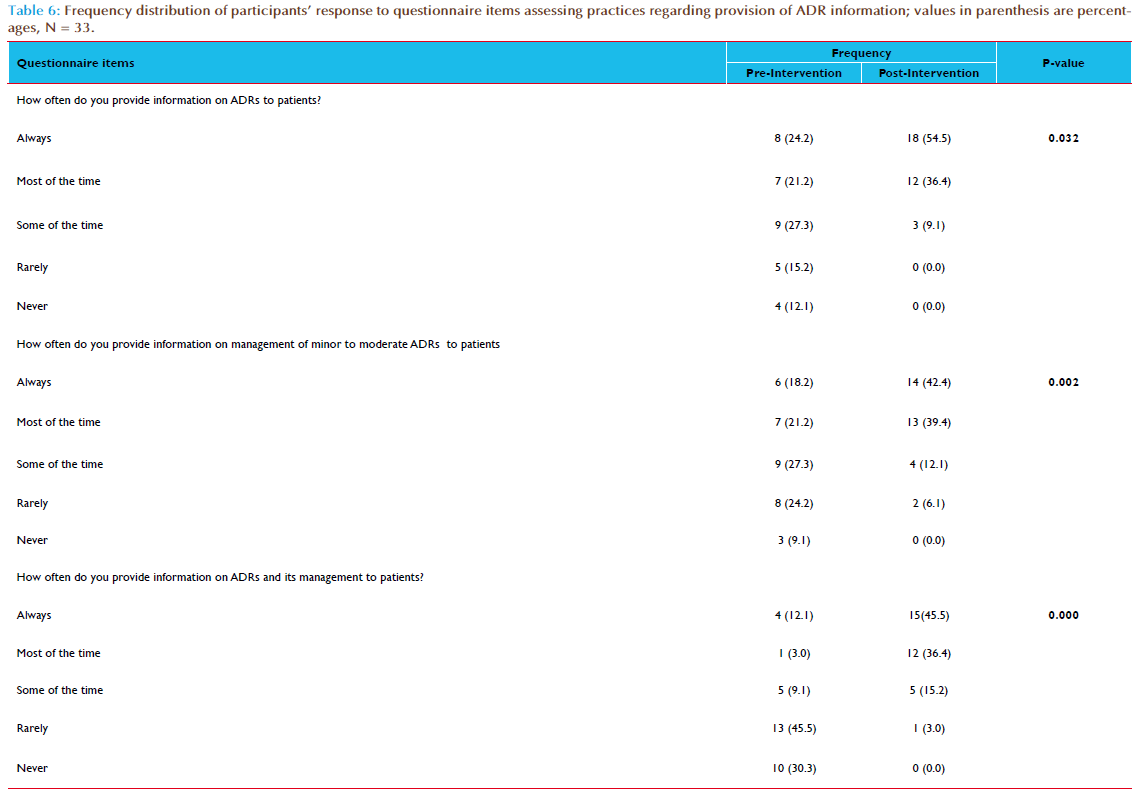 We declare no conflict of interest.