HAART Therapy in Ghana: Assessment of Adverse Drug Reaction Reports of Patients at an HIV Clinic and a Teaching Hospital

Background: Highly Active Antiretroviral Therapy has changed the therapeutic approach to HIV/AIDS treatment. Due to genetic variation, there may be variability in response to HAART in different populations. Inappropriate HAART impacts directly on treatment outcomes as wells as have financial implications fragile economy of a developing country. This study was a retrospective study on the adverse effect profile of different HAART combinations in patients attending an HIV clinic at Komfo Anokye Teaching Hospital in Ghana. Methods: Systematic random sampling was used to select 500 patient records covering a period of 5 years from 2010 to 2014. The variables captured and reviewed included patients’ demographic information, HAART medication, CD4 counts and adverse drug reports. Results: Among the 12 common combinations, AZT+3TC with either EFV OR NVP accounted for more than 50%. In general, a lower CD4 count was associated with a lower adverse drug effect. After adjusting for the presence of other Anti-retrovirals in a HAART, Efavirenz was associated with higher incidence of adverse drug reactions reports than Nevirapine. However patients on nevirapine reported multiple adverse drug reactions than patients on efavirenz. Zidovudine’s adverse effect on the heamatopoietic was enhanced when it was combined with Efavirenz than with nevirapine. The worst HAART in terms of adverse drug reactions was one having both stavudine and nevirapine. Tenofovir usually used as second line was rarely associated with any peculiar adverse drug event. Conclusion: Patients attending HIV clinic in Ghana responded differently to HAART combinations commonly prescribed in Ghana.

There is an estimated 36.9 million (34.3 million-41.4 million) people living with HIV Globally as in 2014.[1] The HIV and AIDS epidemic remains a menace to the economies of many nations, particularly in sub-Saharan Africa.[2] HIV prevalence in Ghana was 1.3% in 2013 with an estimated 189,931 adults and 34,557 children living with HIV.[3] Due to its pathophysiology with high tendency of resistance development, the role of evidence based treatments guidelines is necessary to control the spread.[4] Highly Active Antiretroviral Therapy (HAART), a regimen consisting typically of three or four antiretrovirals has radically changed the therapeutic approach towards HIV infection.[5,6] But in spite of the numerous advantages and benefits associated with its introduction, the issues of drug-induced toxicities remains a great challenge;[7-10] a major cause of non-compliance and discontinuation of the HAART.[7]

Several studies demonstrate that genetic variation between individuals has been identified as a reason why HIV-infected patient on HAART experience adverse drug reaction and virologic failure with some antiretroviral drugs.[11] Studies have identified a correlation between these genetic variations and some antiretroviral drugs due to variations in expression of metabolic enzymes.[12] Due to ethnic and racial variability in response to some antiretroviral it’s not recommendable to transpose results across different regions and populations. This study therefore, aimed at assessing the adverse drug reaction of HAART by comparing different HAART combinations among patients attending HIV clinic at Komfo Anokye Teaching Hospital.

The study was conducted at the Medicine Directorate of Komfo Anokye Teaching Hospital (KATH). The hospital is the only tertiary health institution located in the middle belt of the country. The hospital is located in Kumasi, the capital of the Ashanti Region. It serves as the referral center for other hospitals in and around Kumasi and also from the middle and northern parts of the country. The Medicine Directorate has the HIV clinic which offers voluntary counselling and testing, ART services and patients’ medication counselling.

This study was a cross-sectional descriptive retrospective study done at the HIV clinic of the Komfo Anokye Teaching Hospital (KATH), in Kumasi, Ghana. Systematic random sampling was used to select 500 patient records covering a period of 5 years from 2010 to 2014 (100 folders per year). The variables that were captured and reviewed in the study using the data collection tool included patients’ demographic information such as age, gender, marital status, educational background and occupation. Base line CD4 counts before and after initiation of therapy was captured.

Systematic random sampling technique was used to select patients for the study. Records of patients covering a period of 2010 to 2014 were sampled and reviewed from February to May 2015. Hundred patients’ records were selected from each year. Out of the total number of patients seen during the various years under review, a constant number (kth) was determined, such that each (kth) patient record in respect of each year was selected and reviewed.

Records of HIV patients with morbid conditions, or patients with a change medication treatment as well as patient with completely documented demographics information and prescribed medications in the folders were also included. Records of patient with documented usage of antiretroviral at least once and getting their services at Komfo Anokye Teaching Hospital were included

HIV Patients with incomplete records or those whose records indicate incomplete pre adherence counselling therapy were all excluded.

The data captured was entered into Statistical Package for Social Sciences (SPSS) Version 20.0 database and examined, cleaned and analyzed. Mean and standard deviation was used to describe continuous variables with normal distribution whiles median and interquartile rage were used to describe continuous variables with skewed distribution. Chi squared test was used to test the level of significance of association between any two variables compared. A p-value<0.05 was used assess the level of significance of the assumed hypotheses.

Out of the 500 patients records reviewed in this study, it was noted only 12 combinations of ARVs were prescribed. Among the 12 common combinations, AZT+3TC with either EFV OR NVP accounted for more than 50%. However, 3TC+TDF+EFV combination was also commonly used (14.0%) [Figure 1]. 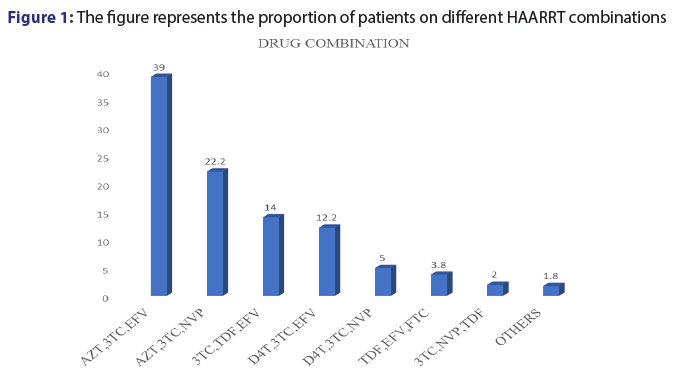 Figure 1: The figure represents the proportion of patients on different HAARRT combinations

Among the patients records reviewed for this study, 13.6% (n=68,) had their medications switched from one combination to the other for various reasons. Among the various reason cited for change in patient medications, drug toxicities and adverse effects was major accounting for 44.1% (n=30). Change in drug policy (17.6%), immunologic failure (14.7) and drug availability (11.8%) [Figure 2]. 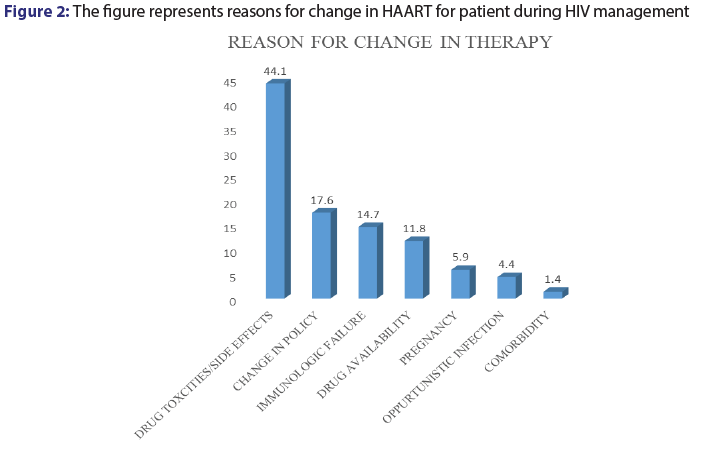 Figure 2: The figure represents reasons for change in HAART for patient during HIV management

There was a statistically significance association between drug combination type and incidence of adverse drug reaction [Table 3].

The prevalence of adverse effects experienced by organ systems was also captured; central nervous system recorded the highest (23.29%), followed by respiratory system (14.34%). Special senses disorder such as pain and numbness in the hands and feet’s recorded the lowest [Table 4].

Table 4: The prevalence of HAART side effects as against organ system

Generally in patients on zidovudine reported lesser Gastro-intestinal and central nervous system related adverse events than patients Stavudine. However, on the red blood cells patients on zidovudine combinations reported more adverse effects than patients on D4T. Subsequently 10.3% of patients on AZT+3TC+EFV experienced low red blood cell count; higher than any of the other combinations used for HAART. The worse combination items of adverse events were one involving Stavudine and Nevirapine. The incidences of itchy skin and skin rashes could not be attributed to any particular medicine used in HAART. However Stavudine and nevirapine combinations were associated with the most frequently reported adverse effect associated with the use of ARV in this study was skin rashes (8.87%) and were more associated with the Non-Nucleoside Reverse Transcriptase Inhibitors, Efervirenze and Nevirapine. However, stavudine appeared to increase skin rashes and itchy skin caused by nevirapine.

This study revealed that majority of the participants were females who were in their reproductive ages of 15 to 45 years and had similar demographics characteristic to others studies in sub-Saharan Africa in terms of gender distribution, socio-economic status and educational level.[18-21] There are conflicting reports about the relation between gender and adverse effects from HAART,[21,22] but our study did not find any association between gender and incidence of adverse drug report. We realized that the incidence or an adverse episode was significantly associated with patient CD4 count at initiation therapy with patients having high CD4 (above 250 cells/mm3) experiencing more adverse effects confirming previous findings.[21]

Generally, in our study, NNRTIs were associated with skin rashes and itchy skin and was consistent with other study.[14] This was not seen with any of the NRTIs but was increased when NNRTI was combined with D4T. This reaction is known to resolve following withdrawal of the offending agent.[23]

Cough was the second most common adverse reaction reported in this study. With the exception of maraviroc, which was not prescribed in the hospital, cough is not a notable adverse events to the antiretroviral drugs prescribed in this study.[24] Patient with advance HIV infection could present cough as symptom. An evidence supporting this finding is found in other studies.[25,26] However, it was observed that 19 out of the 42 folders had tuberculosis as a comorbid condition. This could account for the cough documented as a side effect in this study. Diarrhoea has been linked with the use of protease inhibitor 21, but in this study PI were seldom use. Also hepatotoxicity recorded 1.08% of adverse drug reaction reported in the study. A study conducted in 2006,[27] reported incidence of hepatotoxicity linked with the use of lamivudine and zidovudine, however other studies have also reported hepatotoxicity among patient receiving non-nucleoside reverse transcriptase inhibitors.[28,29]

Distinguishing antiretroviral-related renal toxicity from either direct effects of HIV-1 on the kidney or from a multitude of non-HIV-related kidney diseases is often challenging.[30] Some studies have found an association between certain class of HAART and hypertension. [31,32] Persons living with HIV are known to be at risk for developing cardiovascular diseases or exacerbating a pre-existing one.[33] Hypertension is known to be a precursor to the development of other cardiovascular diseases, efforts to control this condition should be emphasized.

Not applicable in this study

Availability of data and material

Not applicable for that section.

The authors would like to acknowledge to Mr. Robert Incoom and Aliu Moomin for their technical support and assistance.

The authors declare that they have no competing interests. Availability of data and materials. Personal data from this study will not be shared publicly for ethical reasons.

The study was funded by the authors.

Ethics approval and consent to participate

Ethical clearance was obtained from the Committee on Human Research, Publication and Ethics of the Kwame Nkrumah University of Science and Technology, Kumasi. Permission was obtained from the head of the directorate of Medicine at Komfo Anokye Teaching Hospital before data collection was started. Names and addresses of patients were not recorded to ensure that their identities are not exposed. Case Record Forms were stored in a safe place with restricted access. The computer used for the data entry was password protected and secured and only the principal investigator had access to it. Data obtained was used exclusively for the purposes of this study.