Fixed drug eruptions (FDE) are the common dermatological adverse drug reaction accounts for 16–21% of all cutaneous drug reactions in India. Drugs most frequently implicated in FDE are antimicrobials, anticonvulsants, and nonsteroidal antiinflammatory drugs. Here, we report a rare case of bullous FDE due to ciprofloxacin followed by ofloxacin administration.

Fixed drug eruption (FDE) is a distinctive variant of drug induced dermatoses characterized by sharply demarcated, erythematous patches with/without blistering that develop within hours of administration of the causative drug and heals with postinflammatory residual hyperpigmentation. It usually recurs at the same site of the skin or mucous membrane upon subsequent exposure to the same/similar group of drugs. Fluoroquinolones are widely used antimicrobials, which cause cutaneous adverse drug reactions in about 1-2% of patients. [1] However, bullous FDE is rarely reported. Herein we report a rare case of FDE induced by ciprofloxacin followed by ofloxacin administration.

A 37-year-old male presented to the outpatient Dermatology Department of our Hospital, Puducherry with a history of multiple fluid filled blisters over both hands and feet [Figures 1 and 2]. He stated that the lesions appeared within 5 h of taking a single dose of oral ofloxacin, which was obtained as over the counter drug for fever from a local private medical shop. History of itching over both hands and feet followed by a burning sensation and the subsequent development of multiple fluid filled lesions were present. Patient also developed darkening of the lower lip. There was no previous history of any medical conditions such as allergy or atopic dermatitis. On further inquiry, he recalled a history of a similar episode about 1 year back for ciprofloxacin, which has been prescribed for fever. At that time, he was diagnosed with an allergy to ciprofloxacin and treated conservatively. Those lesions were improved over several weeks leaving residual hyperpigmentation. Physical examination revealed multiple flaccid bullous lesions with intact roof of the blister in an erythematous base were seen over proximal metacarpophalangeal joint of left thumb, left instep of sole, right dorsal big toe and little toe of left foot. He had no genital or mucosal lesions. All the routine blood investigations were within normal limits. Nicholsky sign was negative. Diagnosis of FDE caused by ofloxacin was made taking into account of previous history of FDE induced by ciprofloxacin and clinical signs. Patch test was not done as the patient did not give consent for the same. The causative drug ofloxacin was discontinued and the patient was treated with antihistaminics and topical emollients. The lesions and symptoms improved gradually within a week leaving behind residual hyperpigmentation and the patient was advised not to take fluoroquinolones in future. 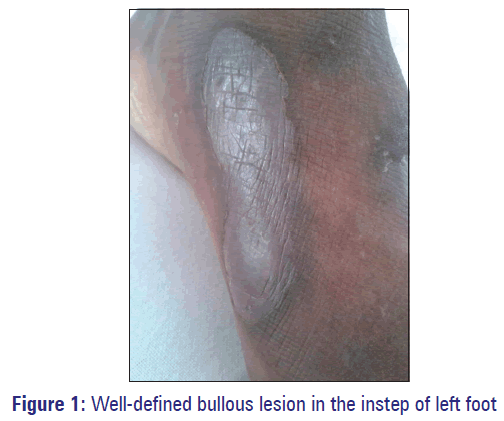 Figure 1: Well-defined bullous lesion in the instep of left foot 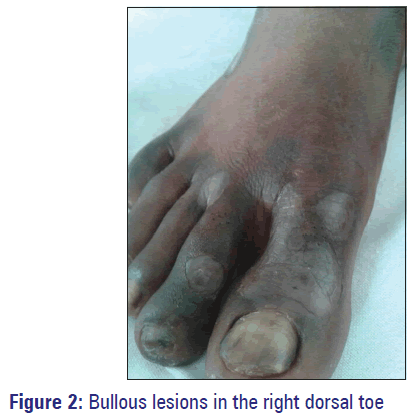 Fluoroquinolones are commonly used antimicrobials (effective for both gram negative and gram positive bacteria) in the treatment of various bacterial infections and are generally well tolerated. Common side-effects include gastrointestinal effects (nausea, vomiting and diarrhea) and neuropsychiatric symptoms (headache and insomnia). Photosensitivity and morbilliform rash have been reported with fluoroquinolones, but FDE is quite uncommon. [2]

A large number of drugs have been reported to elicit FDEs such as trimethoprim-sulfamethoxazole, tetracyclines, penicillin, erythromycin, nonsteroidal antiinflammatory drugs, barbiturates, valproate, phenytoin, phenolphthalein, and nitroimidazoles. [3] Even though, the pathogenesis of FDE is not known, certain serum factors, antibodies, and cell mediated immunity have been attributed as causative factors. FDE is a delayed type hypersensitivity reaction mediated by CD8+ T-cells. Localized tissue damage results when intra-epidermal CD8+ T-cells are activated to kill surrounding keratinocytes and release cytokines such as interferon-gamma into the microenvironment. Quinolones can cause both delayed type and IgE-mediated hypersensitivity reactions. [4]

In this case, Naranjo’s algorithm [5] was used to determine a plausible reaction due to ofloxacin. The following criteria were considered: There were previous conclusion reports on this reaction (+1); the adverse event appeared after ofloxacin was administered (+2); adverse event improved when ofloxacin was discontinued (+1); adverse event reappeared when ofloxacin was re-administered (0); alternate causes that could solely have caused the reaction (+2); the reaction reappeared when a placebo was given (0); drug detected in the blood (or other fluids) in a concentration known to be toxic (0); the reaction was more severe when the dose was increased or less severe when the dose was decreased (0); the patient had a similar reaction to ciprofloxacin in the previous exposure (+1); the adverse event confirmed by objective evidence (+1). Based on the total score of 8, this FDE was categorized as “probable” reaction to ofloxacin administration.

According to WHO-Uppsala Monitoring Centre causality assessment system, the adverse reaction was found to be “probable/likely” reaction to ofloxacin. [6]

Bullous FDE due to fluoroquinolones should be included in the differential diagnosis when FDE is suspected. Our case described the cross sensitivity between two fluoroquinolones ciprofloxacin and ofloxacin used within 1 year interval time. Hence, health care providers should be aware of the diagnosis and proper management of FDE. Patients should be warned against the use of anti-microbials without the physician’s advice.