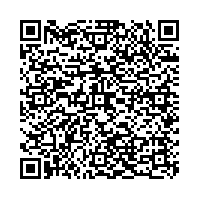 Coronary artery disease (CAD) is one of the most common causes of mortality and morbidity worldwide, caused by coronary atherosclerosis that mediated by dyslipidemia and inflammatory processes; CAD presented as stable angina or acute coronary syndrome that includes acute myocardial infarction and unstable angina. [1] The relationship between adiponectin serum levels and risk of CAD has been widely investigated and remains controversial. [2]

Adiponectin is an adipocytokine secreted from adiposities; it possesses significant insulin-sensitizing, anti-inflammatory, and antiatherogenic effects. [3]

Adiponectin accounts for 0.01% of plasma protein with a half-life of 2.5 h; normal adiponectin plasma level is 5–10 μg/mL with higher levels in female than males due to sexual dimorphism. [4] Adiponectin plasma forms are of two types, high-molecular weight (biological active form) and low-molecular weight. In addition, high-molecular weight adiponectin levels are positively associated with CAD and negatively associated with risk of type 2 diabetes mellitus (DM), but this is not true to the low-molecular weight adiponectin. [5] Adiponectin serum levels are inversely correlated with body mass index (BMI), visceral obesity, and insulin resistance (IR); thus, it regarded as an indicator and predictor of noninsulin dependent DM, insulin resistant, and overt hyperglycemia. Since adiponectin is responsible for provoking of fatty acid oxidation and skeletal muscles glucose uptake, inhibition of liver gluconeogenesis, and stimulation of pancreatic β-cells for insulin secretion, thereby adiponectin plays an important role in linking glucose metabolism with visceral adiposity. [6] Reduction of adiponectin levels in obesity predisposes for the development of CAD due to the reduction of adiponectin-mediated antioxidative, anti-inflammatory, antiapoptotic, and antiatherogenic effects. [7] High adiponectin levels considered as protective against the development of CAD in younger populations, but there is controversy regarding its cardioprotective role in elderly. [8]

IR is a failure of cells to respond the normal insulin action leading to high insulin levels and hyperglycemia, it may be uncertain and undetected until the development of overt diabetes commonly progressing into metabolic syndrome. [9] In IR, there are downregulations of adiponectin and adiponectin receptors leading to a reduction of insulin sensitivity and augmentations of vascular endothelial dysfunctions. [10]

Adiponectin and adiponectin receptors may be a target for different drugs and herbs, berberine, and other herbs such as gingerol, curcumin, and capsaicin have been shown to augment and stimulate adiponectin, which per se explain the potential antidiabetic effects of berberine. [11,12] Furthermore, studies with animal model demonstrated that mice that are fed with the docosahexaenoic acid and omega-3 fatty acid have been shown to stimulate adiponectin gene expression. [13]

The aim of the present study was to evaluate the effects of rosuvastatin and/or omega-3 fatty acid on adiponectin serum levels in patients with IR and CAD.

This study was conducted at the Department of Clinical Pharmacology and Therapeutic in conjunction with the Department of Internal Medicine, College of Medicine, Al-Mustansiriya University from June to November 2015, Baghdad, Iraq. This study was permitted and approved by the Ethical and Scientific Committee; all enrolled patients gave informed written consent for initiation of the study (study permission no. 229/A2).

weight and height were measured through stadiometer and BMI with formula; BMI = body weight (kg)/height (m2). [20]

Waist circumference was estimated in the standing position at midpoint between the upper border of the iliac crest and lower border of the last rib through graduated tape in centimeters. [21]

Hip circumference was estimated in the standing position, the largest distance between the greater trochanters, [22] also measured waist–hip ratio and a waist height ratio.

Basal adiposity index (BAI) is calculated by the following formula: [23] 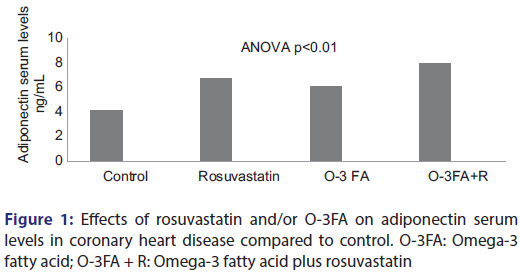 Adiponectin is known for an important physiological effects such as anti-inflammatory, vascular protection, antidiabetic, and cardioprotective effects. [28] Thus, hypoadiponectinemia may predispose patients to the cardiovascular complications and augment the risk of type 2 DM [29] which corresponds with results of the present study. Our study demonstrated a low adiponectin serum levels in patients with CAD and IR.

In acute CAD, the role of protective and beneficial effects of adiponectin remained obscure and uncertain due to various cellular and molecular mechanisms. Earlier studies by Sattar et al. failed to reveal cardiometabolic protection afforded by adiponectin in CAD, [30] therefore, many clinical studies were conducted by stimulating adiponectin effects using drugs or recombinant adiponectin to exert cardioprotection. [31]

The present study showed significant effect of rosuvastatin in elevation of adiponectin serum level with amelioration of cardiometabolic risk factors of CAD patients.

Animal model study reported by Shibata et al., 2005 demonstrated that statin therapy leads to increase adiponectin serum levels and improvement of HOMA-IR in patients with acute coronary syndrome and IR through inhibition of tumor necrosis factor-induced myocardial ischemia and upregulation of myocardial adiponectin gene that regulates cardiac fatty acid oxidation and glucose uptake. [32] In addition, oxidative stress during myocardial infarction leads to myocardial IR and cardiac dysfunction, thus rosuvastatin acts as a direct antioxidant or indirectly through stimulation of adiponectin which is a potent antioxidant. [33,34]

Moreover, rosuvastatin in therapeutic doses in the present study decreased serum insulin levels and improved HOMA-IR. However, study by Thongtang et al., revealed that the highest rosuvastatin dose leads to a moderate increment in the insulin levels. [35]

Rosuvastatin therapy also leads to significant amelioration in lipid profile, atherogenic index, AC, cardiac risk ratio, and reduction in blood pressure compared to patients not taking rosuvastatin; these findings correspond with many previous studies that revealed significant lipid lowering effects of rosuvastatin with preservation of endothelial function through stimulation of vascular endothelial nitric oxide. [36] Rosuvastatin such as pitavastatin is hydrophilic, which exert potent cardiometabolic protection, glycemic control, and adiponectin activation more than lipophilic statins, [37] which further explains the cardioprotective and glucometabolic effects of rosuvastatin in the present study.

Mente et al. observed that the variation in adiponectin serum levels was linked to the ethnicity, especially South Asian and Caucasian peoples. IR in these people was correlated low adiponectin levels, whereas this correlation was not observed with Indian peoples. [45] This observation corresponds with the findings of the current study since all enrolled patients were Iraqi patients.

The present study demonstrated a protective role of adiponectin against acute coronary heart disease (CHD) contrasting with the findings of earlier study by Dekker et al. which showed an association between high adiponectin levels and high cardiovascular mortality risk. [46] This elevation might due to use of common medication that used in CHD such as statins, fibrate, and angiotensin converting enzyme inhibitors which generally increase serum adiponectin levels, or due to the elevation of brain natriuretic levels in patients with heart failure as natriuretic levels stimulate adiponectin secretion. [47]

Limitation of the present study

The study had small sample size which might lead to over or under estimations of adiponectin serum levels. Gender differences in adiponectin serum levels were not evaluated since it is documented as higher in women, [49] we measured only total adiponectin levels not high-molecular weight adiponectin (which is more active and linked to insulin sensitivity). We also did not include hemoglobin A1c and brain natriuretic peptides in our estimations. Moreover, physical activity, dietary habit, and other adipocytokines were also not evaluated in this cross-sectional study. Our study also limited to only one type of ethnic population.

Rosuvastatin and/or omega-3 fatty acid lead to significant cardiometabolic protection through an increment in adiponectin serum levels in patients with CAD.

The authors would like to thank all staff in the Department of Clinical Pharmacology, College of Medicine for their support and cooperation.