Drug utilization patterns in the emergency department: A retrospective study

Objectives: The aim of this study was to assess the prescribing trends and costs of drugs in the emergency department (ED) at Sultan Qaboos University Hospital (SQUH), a tertiary care hospital, in Muscat, the Sultanate of Oman. Materials and Methods: This was a retrospective crossâÂÂÂÂÂÂsectional study of all patients (n = 300) who attended the ED at SQUH in May 2012. Analyses were performed using descriptive and univariate statistics. Results: The average age of patients was 34 ± 19 years. The average number of drugs prescribed per patients was 3.2 ± 1.9 and the majority of the patients (n = 78; 26%) received two drugs. The most common route of drug administration was the oral route (n = 481; 51%) followed by parenterally (n = 357; 38%). NonâÂÂÂÂÂÂsteroidal antiâÂÂÂÂÂÂinflammatory drugs (NSAIDs) were the most commonly prescribed class of drugs (38%) followed by the gastroâÂÂÂÂÂÂintestinal tract drugs (19%) and central nervous system drugs (13%). The average cost per prescription was 242 ± 632 US$. Morphine had the highest cost (1885 US$) followed by cefuroxime (1404 US$) and filgrastim (939 US$) over the 1âÂÂÂÂÂÂmonth period. There was a significant positive correlation between hospital cost and age (P < 0.001), duration of stay at the ED (P = 0.008) and emergency types (P < 0.001). Conclusion: NSAIDs were the most frequent class of drugs administered to patients. Highest number of drugs was prescribed for cardiovascular diseases followed by respiratory and gastrointestinal diseases. AntiâÂÂÂÂÂÂinfective drugs cost was the highest among all other classes. The results of the present study are attempts to highlight the importance of strategies that have to be implemented to optimize medication use at the ED.

Problems associated with drug prescriptions are not uncommon world-wide. These include mainly medications errors and adverse drug events. [1] A meta-analysis of 35 studies between 1990 and 2005 indicated that medication errors occurred in a mean of 5.7% of all drug administration episodes while adverse drug events affected 6.1 patients per 100 hospitalized. [1] Many factors are involved in drug prescription errors including polypharmacy, lack of sufficient pharmacological knowledge, errors in patients’ charts or documentation by nurses, inadequate pharmacy service, being a female, age >65 years, renal excretion of drugs, drugs with narrow therapeutic index and the use of anticoagulants or diuretics. [1] Furthermore, several studies in the United States have consistently reported adverse drug events ranging from 3% to 12%. [2] These studies indicate that 1.5-3% of all adverse drug events occur in the emergency department (ED). However, the EDs had the highest proportion of prevalence of preventable (70-82%) errors. [2]

Patients come to the ED for evaluation of emergent or urgent conditions for after-hours medical care, or by referral from their primary physician. In the ED, doctors face urgent and sever cases that need to be treated quickly with high quality. This creates a challenge for physicians to initiate and select appropriate drugs for the patient. Furthermore, the unique operating characteristics of ED make the ED vulnerable to medical errors including medication errors and adverse drug events. Many factors, either intrinsic or extrinsic, influence the quality of health care in the ED. These include: High levels of activity, high cognitive load, high decision density, high levels of diagnostic uncertainty, inexperience of physicians and nurses, distractions, narrow time window and shift work. [2]

The World Health Organization (WHO) compiled a set of core drug use indicators that are useful for studying patterns of drug prescribing in health care facilities. [1] The WHO also stated that: “Rational use of drugs requires that patients receive medications appropriate to their clinical needs, in doses that meet their own individual requirements for an adequate period of time and at the lowest cost to them and their community.” [3] The WHO core indicators for drug utilization include: Average number of drugs per encounter, percentage of drugs prescribed by generic name, percentage of encounters with an antibiotic, percentage of encounters with an injection, percentage of drugs prescribed from the essential drug list. [4] Another tool used to control and contrast the rational use of drugs is the hospital’s pharmaco-therapeutic guide, which is used and studied by the pharmaceutical and therapeutics commission of any hospital.

In contrast, irrational use of drugs refers to the distribution or consumption of drugs in ways that negate or reduce their efficacy or in situations where they are unlikely to have the desire effect. [5] Irrational prescription of drugs leads to unproductive and risky treatment and poses a major risk of present day medical practice. The problem of irrational drug prescription is not restricted to developing countries as there is evidence from many developed countries on the inappropriate use of drugs. [6] Appropriate medication use is of both clinical and economic significance to any health system and should be given adequate attention. [7]

Drug utilization research is a component of medical audit that plays an important role in pharmaco-epidemiological studies. This is because it reports the extent, quality, determinants and outcome of drug exposure. In addition, it helps in assessing rational usage and cost control of various medications used in the hospital. Pharmaco-epidemiological studies detailing prescribing patterns of physicians are very few from developing countries. [8] Currently, there is limited local data on the prescribing habits of doctors at the ED. The aim of this study was to assess drug prescribing trends, average number of drugs per prescription, the WHO core indicators for drug utilization and prescription cost during patients’ visits at the ED at Sultan Qaboos University Hospital (SQUH).

This study was conducted at the ED of SQUH, a tertiary care hospital, in Muscat, the Sultanate of Oman. The SQUH has a total of 557 beds while the ED has 28 beds. The ED is visited by approximately 60,000 patients annually.

This was a retrospective cross-sectional study of all patients (n = 300) who attended the ED at SQUH in May of 2012. The subjects included both Omanis and non-Omanis from all age groups. The hospital information system was used to extract relevant patients’ information.

The WHO prescribing indicators mentioned above were measured retrospectively from the hospital’s medical records. No information was collected about the signs and symptoms of diseases as this is not a requirement as per the WHO guidelines in this type of study. [4]

Descriptive statistics were used to describe the data. For categorical variables, frequencies and percentages were reported. For continuous variables, means and standard deviations (±SD) were reported. The cost of medications was tested for normal distribution using one-sample Kolmogorov-Smirnov test. The association between drugs cost and patient’s gender was conducted by Mann-Whitney Test and between the drug cost and type of emergency and patient’s outcome. However, the correlation between drug cost and duration of stay at the ED and patient’s age was performed using Spearman’s correlation coefficient. An a priori two-tailed level of significance was set at the 0.05 level. Statistical analyses were conducted using STATA version 12.1 (STATA Corporation, College Station, TX, USA).

Ethical approval for the study was obtained through the Medical research and Ethics Committee at the College of Medicine and Health Sciences.

General characteristics of the patients

Table 1: Summary of the characteristics of the 300 patients in the ED at Sultan Qaboos University Hospital

A total of 103 drugs, belonging to seven categories, were prescribed. Figure 1 shows the most frequently administered classes of drugs. The non-steroidal anti-inflammatory drugs (NSAIDs) were the most commonly prescribed class of drugs (38%) followed by the gastro-intestinal tract (GIT) drugs (19%) and central-nervous system (CNS) drugs (13%). Table 2 outlines the top 10 drugs prescribed to all patients. Paracetamol was the most commonly prescribed drug (n = 195; 21%) followed by morphine (n = 67; 7%) and diclofenac (n = 62; 7%).

Table 2: The top 10 drugs prescribed to 300 patients in the ED at Sultan Qaboos University Hospital in Muscat, Oman

Table 3: Distribution of drug classes across various emergency types among 300 patients in the ED at Sultan Qaboos University Hospital in Muscat, Oman 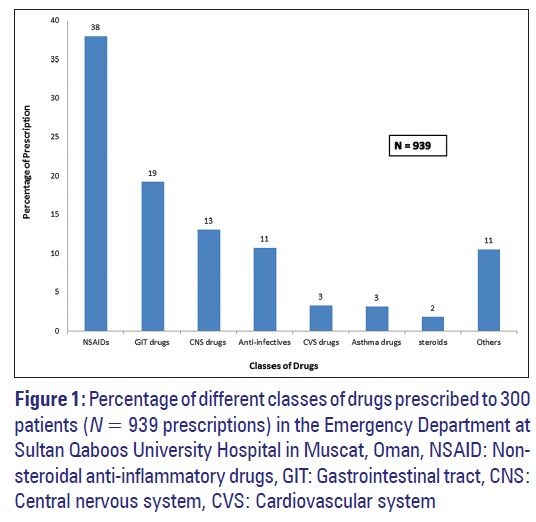 The WHO core prescribing indicators are shown in Table 4.

Table 4: WHO core drug prescribing indicators in the study population (n=300) at the ED at Sultan Qaboos University Hospital in Muscat, Oman

Drug prescribing cost at the ED at SQUH Table 6: The top 10 drugs’ cost of prescribing for 300 patients in the ED at Sultan Qaboos University Hospital in Muscat, Oman

Correlation of drug utilization pattern and cost with different patients’

This study demonstrated a high use of NSAIDs in the ED and this could be explained by the large therapeutic range as shown in Table 3 of this class, especially their usage as analgesics. Furthermore, the reason for high indication of morphine use could be explained by the fact that most patients that visited the ED during the study period were hematological cases (18%; n = 54) having mainly sickle cell disease crisis which required morphine to manage their crisis [Table 3]. This study also showed GIT drugs as the second most commonly prescribed medications (19%) with ranitidine being the most commonly prescribed drug of this class (5%) [Table 2]. This could be reflected by the fact that GIT cases represent 17% (n = 51) of all drug indications in the study [Table 5].

Cost analysis is an important part of drug utilization research. In our study, anti-infective drugs’ cost (2810 US$) was the highest among all drug classes prescribed followed by CNS drugs (2004 US$) and NSAIDs (878 US$) [Figure 2]. This high cost of these classes was due to the high frequency of drugs prescription of these classes as shown in Table 3. Moreover, most patients came to the ED with hematological, gastrointestinal and infectious diseases which require prescription of these classes of drugs. The total cost of all drug classes was 8690 US$ over the 1-month period and the average cost per prescription was 242 ± 631 US$. In a study conducted in India, [10] the mean cost per prescriptions was 784 ± 134 INR (14 ± 2.4 US$). It should be kept in mind that in order to have a realist view on the total cost of ED visits, other aspects of health care such as investigations, stay in hospital and other intangible costs should be calculated. These aspects were not part of the objectives of this study.

This study is not without limitations. No power analysis was performed in this study and one could not be certain that our sample size (n = 300) was a representative sample of the general Omani population. However, the sample size was in accordance with WHO recommendation for practice assessment in individual facilities which requires that a minimum of 100 samples per facility should be collected for the purpose of evaluation. [9,13] This sample size will give a 95% confidence interval of within 10% for the individual result. [13] Furthermore, since this study was performed in only 1 month, it could not have captured seasonal variations, which could have affected prescribing patterns.

The results of this type of studies highlight the importance of strategies that have to be implemented to optimize medication use at the ED. These include ensuring that all persons involved in the medication process have good pharmacological knowledge, computerization of the entire medication process and engagement of clinical pharmacists in such process. The importance of these strategies should be emphasized in medical curricula and continuing medical education of health professionals.