This is an open access article distributed under the terms of the Creative Commons Attribution?NonCommercial?ShareAlike 3.0 License, which allows others to remix, tweak, and build upon the work non?commercially, as long as the author is credited and the new creations are licensed under the identical terms.

Osteoporosis has been defined by many international organizations, one of the most accept definitions is the World Health Organization (WHO) definition on 1994 which is “a disease characterized by low bone mass and micro-architectural deterioration of bone tissue, enhanced bone fragility and a consequent increase in fracture risk” (Kanis et al.). The increased life expectancy and the aging population have led to a high prevalence of osteoporosis, making it a primary health concern associated with high burden. Evidence is suggesting that the prevalence of osteoporosis will continue to rise and escalate. According to the International Osteoporosis Foundation (IOF) fast fact sheet (2011); about 50% of Asian and Caucasian women and 25% of Asian and Caucasian men of the age group of 50 years and above shall experience an Osteoporosis-related fracture in their lifetime. Osteoporosis highly impacts the quality of life of the affected population. About the local population in Qatar, [1-5]. stated that “Osteoporosis is common among menopausal Qatari women and should be considered a matter of public concern”. This was concluded from a cross-sectional study that aimed to establish a reference value for Qatari women and to compare it with values of the other Arab countries and the universal values.

The management of osteoporosis involves several approaches, including medication, lifestyle changes, and fall prevention [5-7]. The mainstay of the pharmacologic treatment includes calcium (1200 mg daily) and vitamin D supplements. These may be used with other osteoporosis medications, like; Bisphosphonates, parathyroid hormone (Teriparatide), the selective estrogens Receptor Modulators (SERM) (Raloxifene), calcitonin (no more used), [8-10]. Although the adherence to calcium and vitamin D is the rate limiting step in the treatment response, yet, there no available literature about the adherence level of calcium and vitamin d supplementation in the Middle East generally and Qatar especially. In this study, we will shed some light on the adherence and persistence of Qatar’s population to Ca/Vitamin D supplementation, and bridges the gap in the literature about the real causes for non-adherence in Qatar’s population.Medications’ efficacy, adherence, and persistence are all important determinants of the treatment outcomes. Therefore, in this study, we aim to assess the adherence to Ca/Vitamin D supplements and to investigate the reasons for non-adherence. This effort is intended to establish ways to overcome the identified barriers enhance the efficacy and contribute to a better life quality for osteoporotic patients in Qatar.

The study proposal has been reviewed and approved by the institutional review board oversees research at Hamad Medical Corporation research and ethics committee, the research Id number is (14134/14). A questionnaire was given to all patients attending the rheumatology clinic in a Tertiary teaching hospital at Hamad Medical Corporation, during the period from April to June 2014. The populations of this study were patients 18 years old and above, receiving Calcium and vitamin D as treatment or prophylaxis of osteoporosis for one year or more and were willing to participate in the study. Patients were excluded from the study who did not accept to answer the questionnaire, short term prescription or taking vitamin D and calcium for other indications than osteoporosis indications.

Patients were approached in the waiting areas, briefed about the survey idea and asked verbally to participate in the study before receiving the questionnaire. A consent form was obtained from each patient before commencing the questionnaire. The study was carried out in an assessment room to ensure patient privacy. This questionnaire described their habits in taking Calcium and Vitamin D during the whole course of treatment and characterizes the causes of nonadherence. It composed of eight questions, seven of them are closeended, and one is an open-ended question. They aimed to assess patients’ adherence and attitude towards chronic medications by asking questions on how often/ why patients forget or intentionally stop taking their medications, adherence to medications during travel, and patients’ perception of taking chronic medications. The primary endpoint was to assess the adherence and persistence of patients to Ca/Vitamin D. The secondary outcomes were to address the reasons for non-adherence and identify the level (percentage) of adherence of particular groups of patients regarding age and educational attainment.

Demographical data and participant’s characteristics were analyzed using descriptive statistics (frequencies, Percentages, mean ± standard deviation) utilized for the response. Chi-square test was used to assess the effect of different factors. Reliability and validation test of tools were done, and SPSS software was used to figure the data. 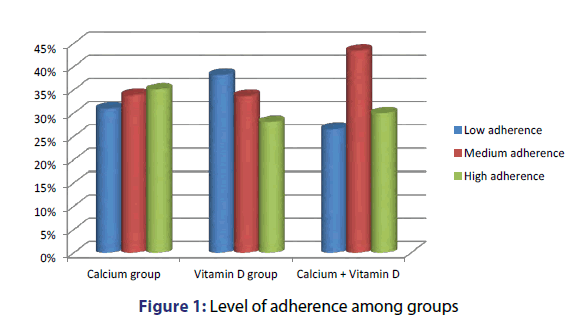 Figure 1: Level of adherence among groups 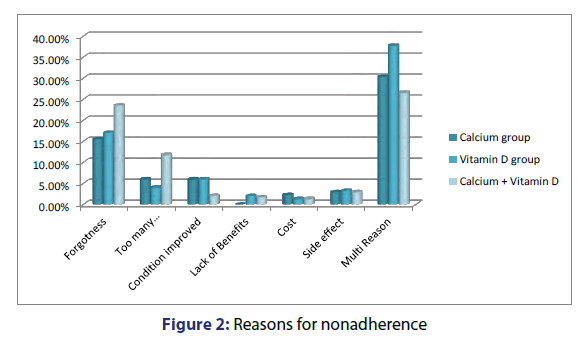 The result showed that the low adherence in college was lower than non- college within the age 18- 39 years old while it was vice versa in other age groups [Tables 2 and 3].

Table 2: Level of adherence and reasons for non-adherence distribution among studied groups

This study was designed to assess adherence and persistence to calcium and vitamin D supplements in patients with osteoporosis, and characterize the reasons for non-adherence. Adherence was as low as 31.4% in all groups, and the main reason for non-adherence was reported by our patients was “forgetting to take the medication”, which is comparable to the results obtained from study evaluated adherence among post-postmenopausal women over 10 years of treatment, sharing the same main reason of non-adherence which was forgetfulness [11,12]. However, another study revealed a higher adherence level to calcium and vitamin D among postmenopausal women, 71% of them were adherent at baseline which decreased at three months follow- up to reach 68% [13].

Surprisingly, the results showed low adherence level among the age group A (18-39 years), who are attending the college, when compared to other age groups. However, highest rate of adherence was observed in the non-collage group among the age groups B (40 -59 years) and C (>60 years). This age and attitude can be explained that the younger patients in better health status, than their comparator of other age groups, and are not aware of the important of the disease or being engaged with their activities which indicates future need for studies to investigate the reasons for better understanding of the problem and to participate actively in solve this problem. Also, in this study there were some other reported reasons like; unpalatable taste, unable to swallow large tablets, side effect, availability, poly-pharmacy, and improved general condition.

This study is the first of its type in Qatar, and its findings are important as they aid clinicians in improving health outcomes and enhancing patient’s adherence via providing an insight into the current problem of non-adherence to a therapy that is considered the mainstay of osteoporosis treatment. It also shows the reasons patients are nonadherent, which would help in directing counseling of this patient population to address these reasons. The issue of non-adherence to chronic therapies has been recognized by the World Health Organization (WHO) as an issue that severely compromises health outcomes, in particular with the growing population of elderly patients and the increase in the burden of chronic disease. The WHO highlights the need for evolution of healthcare system to contain this problem, especially in the developing countries. Numerous studies have been conducted to assess adherence to chronic medications and evaluate the etiology of non-adherence. Adherence to chronic medications was reported by Yaw and colleagues to be globally weak, especially when these drugs are being used to treat asymptomatic conditions for the sake of preventing future adverse health outcomes. Looking into osteoporosis prophylactic therapies specifically, [14]. reports that concomitant use of H2 receptor blocker medications or proton pump inhibitors were inversely associated with adherence. Studies were variable in their findings regarding the relationship between glucocorticoids utilization and adherence to osteoporosis medications. Smoking was also found to contribute to non-adherence. On the other hand, experiencing previous fractures and being aware of the results of bone density tests improved patients’ adherence to osteoporosis medications [14-16]. incorporated the Extended Health Belief Model to explain patient’s attitudes and beliefs towards osteoporosis medications, which may aid clinicians in understanding the motives behind adherence or the lack of it. The main components of this model are the perceived effectiveness of drugs, perceived benefits of taking them, disease threat, concerns about/distrust in medications, and the perceived barriers to taking medications.

This is a cross-sectional study, and data was primarily collected for the purpose of the study. Our study carries the usual limitations of an observational study. Selection bias arises as one of the main concerns of an observational study, and we tried to overcome this by recruiting a high number of participants to guarantee that they are as representative of our population as possible. Ecological fallacy is another concern, and hence clinicians must be careful interpreting results of observational studies and making conclusions about individual patients based on data drawn from a patient population.

Low adherence was high among vitamin D groups, however; there was no significant difference in medications adherence between the two groups. Forget to take medication was the main reason for nonadherence. This study shows the current adherence status among such patients towards their therapy and promotes future intervention to improve the adherence, and further studies to be done to improve patient’s adherence and eventually their health outcome.