Introduction: Generic drugs have the same chemical formula as brand product and they are bioequivalent to the originator product. Insufficient knowledge of healthcare professionals about generics causes’ reduced utilization of these drugs. Therefore, this study narrows the knowledge gap and the findings assist policy makers regarding generic prescribing in the future. Aim: To assess knowledge, Attitude and practiceof pharmacy professionals toward generic products. Method: The study was conducted in all medicine retail outlets in Mekelle city, from April 10, 2016-May 12, 2016. Facility based cross -sectional study was used and the data collection tool were self-administered questionnaire. Statistical test binary logistic regression has been done to determine predictors of knowledge and attitude toward generic medicines. Results: From the current study more than half of the respondents 52.9% (agree=32.2%, 20.7% strongly agree) claimed that they have had knowledge on the concept of generic medicine. Pharmacy professionals with experience of from 2 to 5 years (AOR=25.620 [1.954-335.896) and those with more than 5 years (AOR=106.543 [2.375-4779.542) were more likely to have positive attitude toward generic medicines compared to those with work experience of up to 2 years. Conclusion: More than half of the study participants have had knowledge on the concept of generic medicine and their right to perform generic substitution. The professionals with more experience in the sector could have better view on generic product.

Generic drugs have the same chemical formula as brand product,[1] contains the same active substance as the reference medicine, and it is used at the same dose(s) to treat the same disease as the reference medicine.[2] A generic medicine is a multisource pharmaceutical product which is meant to be interchangeable [3,4] with the comparator product also called innovator, proprietary or brand product. Interchangeable pharmaceutical products are considered as therapeutically equivalent of an innovator product [5]. In order to be approved, a generic medicine should be bioequivalent to the originator product, and must be the same in terms of strength, safety and quality;[3,4,6] they must be able to demonstrate bioequivalence to the originator medicine in terms of bioavailability and the rate of absorption.[7] However, the name of the medicine, its appearance (such as color or shape), its packaging,[2,7,8] size and excipient ingredients [7] can be different from those of the reference medicine. Pre-clinical and clinical testing did not have to be repeated again for generics. The deliberate result of this legislation was to guarantee that generic medicines would be cheaper than the equivalent originator medicine because it was not expected for generic medicine manufacturers to repeat again innovation, pre-clinical and clinical studies.[2]

Globally, the use of generic drugs has increased gradually as a result of financial pressure on drug budgets. In several countries throughout the globe, the practice of generic substitution (GS) is strongly supported by health authorities.[9-14] Public and private third-party payers and health care regulatory authorities increasingly encourage or obligate the use of generics through measures such as generic prescribing and generic substitution.[15-19] In Ethiopia, clinical practice guidelines enforce a prescription to be using generic names of the medicine(s).[20] In addition, the national drug policy offers a pharmacist the right to dispense generic drugs as substitutes for prescribed brand names.[21]

The concepts of generic prescribing and generic replacement have been controversial, and questions continue concerning the acceptance and promotion of generic medicines among healthcare professionals.[22-25] In the UK, for example, there was strong opposition when plans were anticipated to introduce generic replacement into UK primary care.[26] This controversy surrounds issues of quality, safety and efficacy of the generic medicines.[23,24,27,28] There is an apparent lack of knowledge pertaining to the efficacy, safety and quality of generic drugs among healthcare professionals.[29] It is imperative analyzing of the perception and attitude of participating stakeholders regarding generic medicines is a pre requisite to promote the utilization of generics.[5,28]

Inaccurate or insufficient knowledge of healthcare professionals about generics causes’ hesitation on the utilization of these drugs and chiefly about their efficacies and this is becoming a major obstacle to a wider use of these products.[4,30] Studies on consumers’ perceptions suggest that pharmacists are main determinants in consumers’ choice to rational use of generics.[23,30] A study in the area employed pharmacist and physician depicted 51.1% of the respondents believed as generic and brand drugs are totally similar. In the study 59.2% of them disagreed with the concept generic drugs have more side effects than brand drugs.[30] This study narrows the knowledge gap and the findings assist policy makers regarding generic prescribing in the future. The main

The study was conducted in all medicine retail outlets in Mekelle city. Mekelle is the capital city of Tigray regional state, around 783 km away from Addis Ababa the capital city of Ethiopia. In Mekelle there are 2 governmental general hospitals, 1 comprehensive specialized hospital, 32 pharmacies, 47 drug stores and 3 drug venders. This study was conducted from April 10, 2016-May 12, 2016.

Facility based cross-sectional survey was used to assess Knowledge, Attitude and Practice of Pharmacy Professionals towards generic medicines at Mekelle city, Northern Ethiopia.

The source population was all pharmacy professional work in private retail outlets.

Working in the MROs.Study variables

A self-administered questionnaire has been developed through an extensive review of available literature on knowledge, attitudes and practices of pharmacists regarding generic medicines. The questionnaire was developed in English and contained parts on socio-demographic profiles of the participants which followed by questions that assess their knowledge, attitude and practice toward generic medicines. Pretest of the questionnaires were done on private community pharmacies at Quiha town which is in nearest distance to Mekelle and some of the questions were modified accordingly and the revised version of the questionnnaeire were used as a final data collection tool. Data collection was conducted from April 10, 2016 May 12, 2016 by five data collectors. Training focused on data abstraction was provided for the data collectors by principal investigator. Questionnaires were distributed and collected after five days.

The data collected were entered into SPSS Version 23, cleaned and analyzed. In the analysis two knowledge categories were created using the total score for knowledge questions. This ranged from 8 to 40 and a total score of more than 24 (average score) was considered to have ‘adequate knowledge’ while score less than that was considered ‘inadequate’. As to attitude, a score range of 9 to 45 was categorized using 27 as the cutoff point to delineate between positive attitude and negative attitude towards generic medicines. In the scoring, negatively worded questions were reversed. Descriptive aspects of analyses were done through calculating frequency, mean and standard deviations. Statistical test binary logistic regression has been done to determine predictors of knowledge and attitude toward generic medicines. In interpreting these tests p-value<0.05 at 95% CI was used as a cutoff point to determine statistical significance of associations.

From this study, Only position (owner vs employee) had statistically significant association in bivariate analysis which was lost in adjusted ORand it showed employee has less knowledge than Full/partial ownership (COR0.736[95% CI,0.150-0.946]). No significant differences were observed among other socio-demographic and work profiles on knowledge of generic medicine [Table 3].

Attitude and practice of pharmacy professionals toward generic medicines

Table 6: Possible influencing factors related to selection and dispensing of generic medicines among the community pharmacists.

From this study, Only position (owner versus employee) had statistically significant association in bivariate analysis which was lost in adjusted OR and it showed employee has less knowledge than Full/ partial ownership (COR 0.736 [95% CI, 0.150-0.946]) this difference may results from the difference in interest. Those business holders might have great interest toward their professional practice due to their From the study participant’s 34.4% have an attitude of generic medicines are less effective compared to brand name medicines and 50% of respondents disagree with the concept of generic is less effective in comparison to brand products. Study from Malaysia reported 58.4% of the pharmacist’s perceived local generics as equal in safety and efficacy as the imported products,[35] which shows better perception in generic medicine acceptance in Malaysia than Mekelle so, promotion of generic medicine might be critical work in Mekelle. More than half (51.7%) of the participants support the idea of brand name medicines are of higher quality compared to generic drugs this finding is better when we compare to the result reported from Australia that depicted 89.6% of participants claimed generic medicines are of inferior quality to brand-name drugs.[33] The difference of those two findings might be the result of the difference in the nature of the participant’s in case of Australian study, the participants were pre-registrant pharmacist and in case of our study, the practitioner from junior to senior were involved. From the current study 39.1% of the respondent’s claimed that they support generic substitution for brand name medicines in all cases where as generic is available but study from India published that 80% of the respondents did not support generic substitution, even in case of prescribed medicines are not available.[36] From our study we can realize that our community pharmacy practitioner has good attitude and awareness toward generic substitution. The current study showed 50.5% of the participants claimed that community pharmacists should be allowed to perform generic substitutions without consulting prescribing physicians which is lower than the report of Turkey that revealed 55% of the respondent’s acclaim that Pharmacist may substitute a generic on his own.[37]

Pharmacy professionals with experience of from 2 to 5 years (AOR=25.620 [1.954-335.896]) and those with more than 5 years (AOR=106.543 [2.375-4779.542) were more likely to have positive attitude toward generic medicines compared to those with work experience of up to 2 years this might be the result of experience, if the pharmacists had more experience in their professional sector they could have better view on generic product.

From findings of the current study 48.3% of respondents claimed that lack of belief in generic medicines is one of the factor during dispensing, this finding is much higher when we compare it with the findings reported from Ireland that depicted 98% of pharmacists believed that generics were of a similar quality to the originator, and 96% stated that they were as effective as the originator.[38] This difference might be the result of difference in awareness of community pharmacist in Ireland and Ethiopia. As we know Ireland is developed countries and the awareness of the practitioner and implementation of quality health policy would be better. Around three fourth (73.6) of the respondents in the current study consider affordability to the customer is important factors for dispensing generic products. Which is lower report in comparison to findings announced from Australia that showed 91.3% of participants claimed generic medicines are less expensive than brand-name medicines.[33] This might be results from extra availability of generic products which reduce price of the generic products. 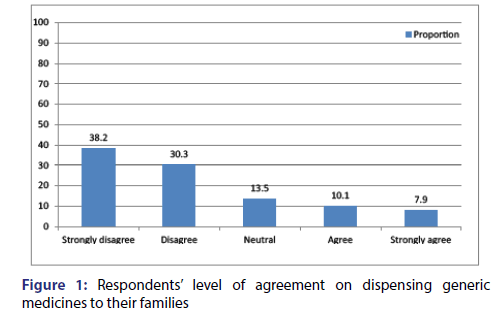 Figure 1: Respondents’ level of agreement on dispensing generic medicines to their families 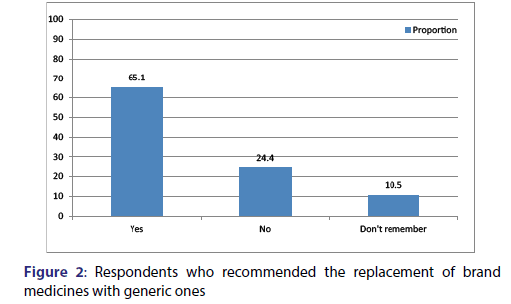 Figure 2: Respondents who recommended the replacement of brand medicines with generic ones

From this study it is possible to conclude that more than half of the respondents have had knowledge on the concept of generic medicine and their right to perform generic substitution.Year of experience were depicted as a factor for difference in their knowledge and if the pharmacists had more experience in their professional sector they could have better view on generic product. Nearly half of the participants of this study claimed that lack of belief in generic medicines is one of the factors during dispensing.

Deepest gratitude goes to the study participants and for the owner of medicine retail outlets in Mekelle city for their permission to conduct this study.