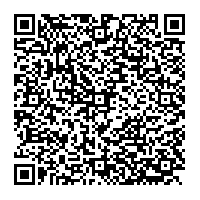 Context: Epilepsy is one of the most common chronic neurologic conditions in children, and it is associated with increased risk for poor health-related quality of life. Quality of life is affected by seizure frequency, maternal education, type of epilepsy, and type of anti epileptic in Indian children with epilepsy. Cognition, emotional functions and concentration are most commonly affected due to epilepsy. Aim: The aim of the study was to explore the current status of Quality of Life (QOL) in epileptic children by using QOLCE-55 questionnaire. Materials and Methods: A prospective observational study was carried in our hospital in which 104 children aged 4-13 years with epilepsy were recruited from the inpatient and outpatient services of the department of pediatrics, of a tertiary care teaching hospital in South India. QOLCE questionnaire was completed by parents and epileptic children. The collected data was analyzed by using graph pad prism 7.0 version. Results: The mean overall QOL score was 46.82 ± 10.90. Overall QOL was affected by type of epilepsy, seizure frequency, type of antiepileptic drug and maternal education. Cognitive functions was found to be affected more severely with the lowest mean score of 37.99 ± 18.35, physical functions were not affected much with mean score of 61.10 ± 13.44. We also observed that patients who are receiving Sodium valproate and Iminostilbene like Carbamazepine and Oxcarbamazepine having better QOL than the Phenytoin and Clobazam. Conclusion: Children with epilepsy have a comparatively weaken quality of life and focusing exclusively on control of seizures. In our study we evaluated that most of the patients are having cognitive impairment and decreased social functions. So the patients should be monitored regularly and treated appropriately. We also observed that patients with Sodium valproate and Carbamazepine are having better quality of life.

Epilepsy is one of the most common chronic neurologic conditions in children, and it is associated with increased risk for poor healthrelated quality of life. [1,2] Children with epilepsy experience difficulty in aspects of functioning, including emotional and behavioral problems, Social competence, academic achievement, and family life, with effects extending into adulthood. [3,4] The management of epilepsy requires recognition of potential effects of epilepsy and all aspects of life. [5] Childhood epilepsy is one of the most significant and prevalent neurological condition in the developing years. Several studies indicate that childhood epilepsy is a high risk factor for poor psychosocial outcomes including depression and anxiety [6], low self-esteem [7-9], behavioral problems [10-12] and academic difficulties. [13]

Quality of life is affected by age, seizure frequency, parent’s education, type of epilepsy, and type of anti epileptic in Indian children with epilepsy. Cognition, energy levels and concentration are most commonly affected due to epilepsy. [14] QOL can be assessed by generic or disease specific measures. Generic measures of QOL assess function, disability and distress resulting from general ill health and have the advantages of allowing comparisons with healthy population. [15,16] Quality of life (QOL) is concerned with “the degree to which a person enjoys the important possibilities of life”. Health-related quality of life (HRQOL) characterizes a person’s perception of how health influences an individual’s life quality and overall well-being. Quality of life is an important measurable outcome of care for conditions that do not threaten life. [17]

The generic scales used to measure the QOL like child health questionnaire are insufficiently sensitive to epilepsy. [18] There is lack of research on QOL among children with epilepsy from the developing countries, with only a few studies from India [19] We planned the present study to assess the QOL using a Telugu translation of Quality Of Life in Children with Epilepsy (QOLCE) questionnaire. Factors such as age at disease onset, seizure etiology, seizure type, epilepsy syndrome, comorbid conditions, and non-adherence to AEDs could lead to poor seizure control among epilepsy patients. Noncompliance to medication is considered one of the most important factors for failure in the control of epileptic seizures and can have adverse effects on clinical, social, and economic outcomes of the patients. [20] The aim of the study was to explore the current status of Quality of Life (QOL) in epileptic children by using QOLCE-55 [21] questionnaire.

A total of 104 children with epilepsy were recruited from the department of Pediatrics, at the Mahatma Gandhi Memorial tertiary care teaching hospital, Warangal, Telangana, India. It is a prospective observational study. Before initiation of the study, the approval of the Institutional Ethics Committee was obtained from Vaagdevi College of Pharmacy, Hanamkonda, Warangal, Telangana. The IEC code given after the validation of questionnaire was VCOP/PHARMD/V/2016/19/02. All the subjects parents/guardians consent was taken by giving information regarding the study and use of the study. The age of the children ranged from 4-12 years with mean age of 7.84 years at the time of recruitment. Epileptic children receiving anti epileptics for at least a period of 6 months were interviewed by investigators. Demographic profile was assessed, which included Age, sex, place of residence, family history, parent’s education status, income, and. development of child, type of seizure, seizure frequency and therapy was recorded. Diagnosis of the type of epilepsy was made by history, EEG. Children with mental retardation and below 4 years were excluded from the study.

The QOLCE-55 was translated into Telugu. Translation was done by two qualified independent linguistic translators; both native speakers of Telugu and proficient in English. It was retranslated to English and found to be similar. The final version of Telugu questionnaire was completed and made available for the reliability and validity study. It was validated by institutional committee members. The QOLCE was filled and coded by a single investigator, as per the standard instructions available with the questionnaire. QOLCE consists of 4 subscales. Each subscale has number of items or questions with responses as excellent, very good, good, fair, and poor. They are changed to 1, 2, 3, 4 and 5 as per instructions. Then changed on a scale of 100 i.e., 1=0, 2=25, 3=50, 4=75, 5=100. Items corresponding to each subscale are marked and their mean score is score of that subscale. An overall QOL score was computed by adding each subscale score for each individual and then dividing by respective number of items.

We have collected the patient response from past and present medical and medication history and by referring the case sheets and by interacting with the patient and patient care taker by using questionnaire.

The data was analyzed using software (Graph pad prism 7.0 version). The calculation of statistical significance was derived by using one-way ANOVA. The data were represented as a mean ± standard deviation of the mean values.

The sample of 104 children was predominantly male with 64 boys (61.54%) and 40 girls (38.46%) shown in Figure 1, with a mean age of 7.84 years (S.D.=2.38). Age distribution was shown in Table 1. Out of the 104 subjects, 17 (16.34%) had normal Electro encephalogram (EEG) report, 87 (83.65%) had abnormal EEG report. Most of the patients recruited in the study were belongs to rural areas and most of them are illiterate and their mean monthly income of Rs.9437. In total number of population who are having family history of epilepsy are 72 (69.23%), and who are not having family history of epilepsy are 32 (30.77%). Frequency of seizures is more in patients who are having family history and attack of epilepsy in neonatal age. The most frequent seizure types was generalized tonic clonic seizures (GTCS) were seen in 71 (68.26%) children, complex partial seizures were seen in 15 (14.42%) children, simple partial seizures were seen in 09 (8.65%), myoclonic seizures were seen in 09 (8.65%). Seizures distribution was shown in Figure 2. Most of the children (89.43%) were receiving only one anti epileptic drug and some children (10.57%) were receiving two anti epileptic drugs. Most of the parents expressed major concerns about antiepileptic drugs causing change in behavior or making the child less alert or able to concentrate on a task at hand.

Table 1: The age distribution among the epileptic patients.

The overall QOL and that for the various subscales is shown in Table 2. The mean overall QOL score was 46.82 ± 10.90. The overall mean QOL score of male was 45.78 ± 11.15 and female was 48.20 ± 10.68. Cognitive functions was found to be affected more severely with the lowest mean score of 37.99 ± 18.35, physical functions were not affected much with mean score of 61.10 ± 13.44. High seizure frequency was shown to adversely affect memory, language, social, emotional and other cognitive functions of the child. It was also found to significantly increase the level of anxiety, decrease self esteem and limit social interactions of the patient. 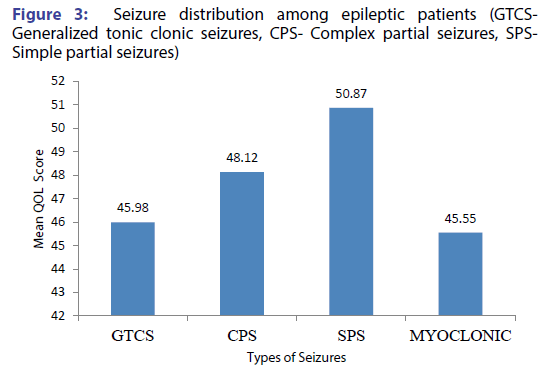 *P value is significant at the 0.05 level (intra group comparison by one way anova)

Assessment of health related quality of life in children with epilepsy are lacking in India. In patients with epilepsy, the efficacy of a new intervention has traditionally evaluated on the basis of clinical endpoints, although patients face a range of psychosocial problems. In recent years the goal of epilepsy treatment has been not only control of epileptic seizures, but also improvement of QOL. At present although many scales can be used to assess the patients with epilepsy, only a few are epilepsy specific scales questionnaires. We have used QOLCE-55 version scale and it is already proven that this scale having good internal consistency and reliability so we have used this version to assess the quality of life of epileptic children.

Epilepsy is a chronic and serious neurological disorder with multifaceted uncertainties and stigmatization which have significant negative role in the QOL of those afflicted by the disorder.

There is a mixed opinion regarding the impact of the type of epilepsy on the QOL. Patients with GTCS and Myoclonic had poor quality of life in family relationships, social life and ability to work. These patients also had poor perception of overall health and had no clear ambitions or plans for the future. It is evident that they felt that their standard of living is low with poor relationship with friends and had poor selfesteem. Reported lower score in case of patients with GTCS. [19]

Although the present study also revealed the duration of epilepsy which might play an important role in QOL, was analyzed and it was found that patients with duration of more than 5 years had poor QOL. These patients had lower cognitive functions which had limited their daily activities with poor attention/concentration with feeling of language dysfunction. These patients also had seizure worry memory disturbance, fatigability and health discouragement. They were also worried about long term side effects of anti epileptic drugs and had poor social support. Reported lower scores with shorter duration of epilepsy with significant effects on energy and emotional well-being. [22] In past years numerous studies have proved improved QOL with monotherapy this may be partly due to reduced adverse effects commonly associated with polytherapy. [23,24]

Parents of 2/3rd of all examined patients with epilepsy reported school problems which were the results of disturbed memory and attention. Similar results were obtained by Talarska. [28] We also observed that patients who are receiving sodium valproate and iminostilbene like carbamazepine and oxcarbamazepine having better QOL than the phenytoin and clobazam.

Children with epilepsy have a comparatively weaken quality of life and focusing merely on control of seizures. In our study we evaluated that most of the patients are having cognitive impairment and decreased social functions. So the patient should be monitored regularly and treated appropriately. QOLCE-55 version 1.0 is a newly evaluated and it is an acceptable tool to evaluate the quality of life in children. We also observed that patients with Sodium valproate and Carbamazepine are having better quality of life.