Anti-inflammatory and antipyretic properties of the rhizome of costus speciosus (koen.) SM

Rhizome of Costus speciosus has been traditionally used for treating inflammatory and painful conditions. The objective of the present study was to provide a scientific basis for the traditional use. The ethanolic extract of the rhizome of Costus speciosus possesses anti-inflammatory and antipyretic properties. Anti-inflammatory property was studied in carrageenan induced paw edema and cotton pellet induced granuloma formation. Significant anti-inflammatory effect was found against carrageenan induced edema formation in rats at a dose of 800 mg/kg and against cotton pellet granuloma formation in rats at doses of 400 mg/kg and 800 mg/kg. The antipyretic property was studied in yeast-induced pyrexia in rats. The antipyretic effect was only minimal and was observed only at 800 mg/kg dose.

Costus speciosus (Koen.) SM. is a plant belonging to the Zingiberaceae family, which is found in various parts of India, Taiwan and Malaysia [1]. Commonly known as “Pushkara”, “Kashmeera”, “Keu” and “Kust”, the plant is described as a succulent plant with long simple spirally arranged leaves and spirally twisted stems which can grow up to a height of 1-3 metres and have horizontal rhizomes which are used in traditional medicine. The rhizomes are used in constipation, skin diseases, fever, asthma, bronchitis, infl ammation and anemia6 and are medicinally tried to utilize its antihelminthic, astringent, purgative and aphrodisiac properties [2]. The alkaloidal fraction from Costus speciosus was evaluated for anticholinesterase activity [3] and was later demonstrated to possess papaverine like smooth muscle relaxant action, diuretic, cardiotonic and central nervous system depressant activities [4].It was recognized as a source of diosgenin [5] and the saponin content was found to have antifungal activity [6].

Traditionally this rhizome has been used for many infl ammatory conditions and in fever, but there was no scientifi c data available for the rationale behind this usage. Against this back drop the authors decided to undertake the present study to evaluate the anti-infl ammatory and antipyretic properties of the rhizome of Costus speciosus.

The study was conducted after getting approval from the animal ethics committee of the institution and all ethical principles were followed during the entire study.

The rhizomes of Costus speciosus were collected from forests near Ponmudi, Thiruvananthapuram district, Kerala state. Its botanical identity was confi rmed and certifi ed by the Department of Taxonomy, Tropical Botanical Garden and Research Institute (TBGRI), Palode, Thiruvananthapuram. A voucher specimen of the plant is kept in the Herbarium of TBGRI (Specimen No. TBG&RI No. 43397).

Th e rhizomes were washed with water, air-dried in shade and cut into small pieces. These pieces were pulverized in a mechanical grinder and the powder was used for extraction using soxhlet method with 50% ethanol. The extract was kept in a water bath for evaporating the remaining ethanol and the deep brown residue obtained was kept in a desiccator for further experiments. The percentage yield was 3.9%.

Adult albino rats of Wistar strain weighing 160-200 grams and Swiss albino mice weighing 20-25 grams were used for the study. All animals were kept in Polypropylene cages in the animal house facility of Medical College, Thiruvananthapuram and maintained under standard laboratory conditions. They were fed with a standard diet and bengal gram and water was given ad libitum. All experiments were conducted after overnight fasting but there was free access to water.

Aspirin was purchased from Sigma Labs, Mumbai. Hydrocortisone was prepared from Hydrocortisone tablets (Samarth Pharma, Mumbai) and the purity was confi rmed by infrared spectroscopy and melting point determination at the College of Pharmaceutical Sciences, Thiruvananthapuram. Carrageenan was purchased from Sigma Labs, Mumbai. Since the extract was getting sedimented in water, carboxy methyl cellulose (CMC) in which the extract could be made into a suspension was taken as vehicle in a concentration of 1% throughout the experiment.

A preliminary phytochemical screening done for the qualitative estimation of chemical ingredients in the extract showed the presence of alkaloids, saponins, carbohydrates and phytosterols. Flavonoids, phenolic compounds, amino acids and proteins were absent.

Eff ective doses of the extract were determined after conducting acute toxicity study [7,8] and study on gross behavioral changes [9,10].

Rats of both sex were randomized into fi ve groups of six each. Th e fi rst group served as control and was given 1% CMC (1 ml/100 gm body weight). Th e second group was kept as the standard and it received Acetyl salicylic acid in a dose of 300 mg/ kg suspended in CMC. Th e third, fourth and fi fth groups received the extract in doses of 200 mg/kg, 400 mg/kg and 800 mg/kg respectively. A mark was made on the skin over the lateral malleolus with a marker pen. After 1 hour of drug administration, 0.1 ml [12] of 1% carrageenan suspended in sterile 0.9% saline was injected into the plantar tissue of the right hind paw. Immediately thereafter, the paw was immersed in water exactly to the mark. Th e volume of the injected paw was measured using a Plethysmometer [13]. Th is gave the initial paw volume (IPV). After 3 hours of carrageenan administration the paw volume was again measured to get the fi nal paw volume (FPV). Th e diff erence between these two values gives the increase in paw volume (FPV-IPV). Th e percentage of inhibition was calculated using the formula [11],

X = mean increase in paw volume of rats in the control group,

Thirty rats of both sex were divided into fi ve groups each containing six rats. Sterilized cotton pellets weighing 10 mg made from no.1 dental cotton rolls were implanted subcutaneously under light ether anesthesia [15]. Four pellets were implanted in each animal, one in each groin and one in each axilla. Drugs were administered orally for four consecutive days, the first dose being given immediately after the implantation of pellets. The first group served as control and the second group which was kept as standard was given Hydrocortisone 25 mg/kg body weight every day [16] suspended in CMC. The third, fourth and fi fth groups received the extract in doses of 200 mg/kg, 400 mg/kg and 800 mg/kg respectively. On the fi fth day, pellets were dissected out, freed from extraneous tissues [12] and dried overnight in a hot-air oven at 60ºC and weight of each granuloma was determined. Th e diff erence between the initial weight and the fi nal weight of the cotton pellet gives the amount of granulation tissue formed. Th e percentage inhibition of granulation tissue formation was measured by the following method [16],

Only male albino rats were used for antipyretic study. Rectal temperature was recorded by inserting thermocouple 2 cm into the rectum [18]. Those showing normal rectal temperature were selected for the study. They were randomized into fi ve groups. The animals were made pyretic by subcutaneous injection of 12% suspension of yeast in 0.9% saline. Volume of injection was 1 ml/100 grams body weight. Initial temperature was noted which is the temperature just before yeast administration [19]. Immediately after yeast injection, food was withdrawn [20]. Drugs were administered orally 10 hours after yeast administration. The first group was kept as control and was given CMC. The second group received Acetyl salicylic acid in a dose of 300 mg/kg suspended in CMC [21]. The third, fourth and fifth groups received the extract in the doses 200 mg/kg, 400 mg/kg and 800 mg/kg respectively. Readings were taken at 90 minutes, 180 minutes and 270 minutes after drug administration using a thermocouple. The results were analyzed by Student’s t test and Kruskal Wallis test using SPSS version 9.0 (SPSS Inc. Chicago, IL, USA).

Th e ethanolic extract of Costus speciosus inhibited the development of edema at the end of 3 hours and the eff ect was dose dependent and was statistically signifi cant (p< 0.05). The effect was most prominent with 800 mg/kg dose (Table 1) where as at lower doses, the eff ect was less. The effect produced by 800 mg/kg dose was about 63% of the effect produced by Acetyl salicylic acid, which was used as the standard.

In cotton pellet induced granuloma formation study, regarded as an animal model for subacute infl ammation, there was a statistically signifi cant (p<0.05) reduction in granuloma formation at all doses in comparison to the control group (Table 2). Th e eff ect produced by the extract at 400 mg/kg and 800 mg/kg doses was almost similar. But the eff ect was comparatively less in 200 mg/kg dose.

There was a mild reduction in the rectal temperature of rats treated with 800 mg/kg extract (Figure 1). The effect occurred after 180 minutes of drug administration and it persisted even after 270 minutes. The effect remained almost the same during this period. There was no signifi cant reduction in temperature in the groups which received 200 mg/kg and 400 mg/kg extract. But the standard was found to reduce the temperature signifi cantly at all time intervals. 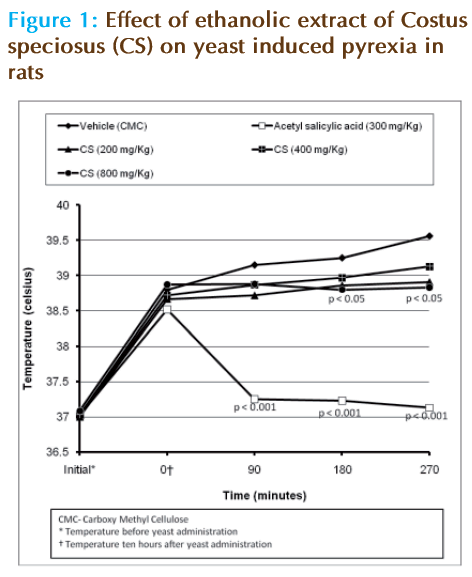 Fever and infl ammation are symptoms commonly associated with diseases and these symptoms are the most troublesome aspects of the disease process as far as the patient is concerned. Rhizome of Costus speciosus has been used to alleviate these symptoms. The present study supports the traditional use of this plant against infl ammation and fever and verifies the properties scientifically. The plant was effective in both acute infl ammation as well as sub-acute infl ammation. The anti-infl ammatory effect in cotton pellet induced granuloma formation had a slight edge over that in carrageenan induced edema in that, the effect was present even at lower doses. The fact that the plant causes a considerable inhibition of granuloma formation at doses which could produce only a minimal inhibition of edema formation, indicates that the plant is effective in preventing subacute infl ammation. The development of carrageenan-induced edema is biphasic; the first phase is attributed to the release of histamine, 5-HT and kinins while the second phase is related to the release of prostaglandins [22,23]. It is not clear on which phase the extract acts. The present study indicates that Costus speciosus is having a low antipyretic activity and that too, only at high doses. In general, non-steroidal anti-infl ammatory drugs (NSAIDs) produce their antipyretic action through the inhibition of the production of prostaglandins in the hypothalamus.

Th e authors are thankful to Dr MN Rema, Dr C.R. Sudhakaran Nair, Prof M. Sureshchand and Prof. B. Seetha Devi for the extended help off ered at diff erent stages of the work. Th anks are also due to Dr Jaya Geetha P.B., for her help in the statistical evaluation of results.