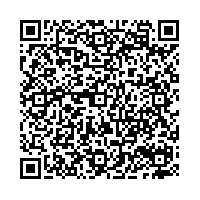 Calotropis procera, a member of latex-producing plants of subfamily Asclepediaceae, is a wild growing shrub that tolerates extremes of weather conditions and has been used in traditional medicinal system for treating various diseases. [1] The plant produces milky latex that is present in abundance in its aerial parts and oozes out when the plant gets injured. It serves a defensive role in the plant and contains various secondary metabolites and enzymes. [2] Like different plant parts, the latex has been shown to exhibit various medicinal properties which include its antiinflammatory, analgesic, antidiabetic, hepatoprotective, anticancer, and antiarthritic properties. [3-8] Most of these properties have been reported either in the aqueous or organic extracts of the latex or proteins present in the latex. The antiinflammatory and analgesic properties of these fractions have been demonstrated in various rodent models. [4,9,10] The proteins present in the latex (LP) have been segregated into three sub-fractions namely, LPPI, LPPII and LPPIII by performing ion-exchange chromatography. The LPPI sub-fraction comprises of high molecular weight proteins and exhibits antiinflammatory properties. It is devoid of proteolytic activity while LPPII and LPPIII exhibit proteolytic activity. [10,11] Like LP fraction, the LPPI sub-fraction has been shown to inhibit neutrophil infiltration at the site of inflammation and to afford protection in a murine model of sepsis. [10,12]

Inflammation is a response of the body to infection and injury and is characterized by cardinal signs such as redness, swelling, heat, pain and loss of function. During an acute inflammatory response, the neutrophils are recruited at the site of injury where they produce reactive oxygen species (ROS) in abundance and alter the cell homeostasis. [13] Acute inflammation induced by carrageenan in the hind paw of the rat is a widely used model to evaluate the antiinflammatory property of a compound. [14] Using this model, the anti-edematous and antioxidant effects of high molecular weight protein fraction of C. procera latex were evaluated in the present study.

The fresh latex was collected in tubes (1:1, v/v in distilled water) from the aerial parts of C. procera plant growing in the vicinity of Fortaleza, Brazil and a voucher specimen of this plant was deposited at Prisco Bezerra, Herbarium of Universidade Federal do Ceara, Brazil. It was centrifuged (5000 ×g for 10 min at 10°C) to remove the pellet rich in rubber, and the supernatant was separated and dialyzed against distilled water with a membrane having cut-off value of 8000 Da. The nondialyzable fraction was lyophilized to obtain latex proteins (LP) that have been reported to be free from any toxic and undesirable effects. [9] The LP fraction was further separated by ion-exchange chromatography into three sub-fractions LPPI, LPPII and LPPIII that were analyzed by sodium dodecyl sulfate-polyacrylamide gel electrophoresis as described earlier where LPPI was found to comprise of high molecular weight proteins. [10]

Wistar rats of either sex (150–180 g) used in the study to carry out the experiment were housed in the animal house and had free access to water and food. The experiment was conducted in accordance with the guidelines of Institutional Animal Ethics Committee following due approval (731/IAEC/13).

Carrageenan and diclofenac were obtained from Spectrochem and Arbro Pharmaceuticals. Other chemicals used for the biochemical estimations were of analytical grade and procured from Qualigens. The drug solutions were prepared in normal saline (NS).

Edema was induced in the hind paw of the rat by injecting 0.1 ml of 0.5% carrageenan into the sub-plantar surface while 0.1 ml of NS was injected in NC group. [15] A mark was put on the lateral malleolus and up to this mark the paw volume was measured using plethysmometer just before, that is, 0 h and 3 h after injecting carrageenan. Edema volume was calculated by taking difference between the 0 h and 3 h readings. The inhibitory effect of LPPI and diclofenac was expressed as percentage inhibition with respect to CC using the formula Vc − Vt/Vc × 100 where Vc is the mean edema volume of control group and Vt is the mean edema volume of drug treated group.

At the end of the experiment, the rats were sacrificed, the paws were dissected out and stored at −80°C for biochemical estimations.

The GSH level was measured by the method of Ellman. [16] A 10% homogenate of tissue was prepared in 5% trichloroacetic acid and centrifuged at 3000 rpm for 10 min. The supernatant was separated and to 0.1 ml of supernatant, 4 ml of 0.3 M phosphate buffer and 0.5 ml of 5, 5’-dithiobis-(2-nitrobenzoic acid) were added. Absorbance of the reaction mixture was read at 412 nm. The standard curve was plotted, and the tissue GSH level was determined and expressed as μg/g tissue.

The level of MPO, an index of neutrophil sequestration, was measured in the paw tissue by the method of Bradley et al. [18] A 10% tissue homogenate was prepared in 50 mM phosphate buffer containing 0.5% hexadecyltrimethyl-ammonium bromide (pH 6.0). It was subjected to freezing, and thawing four times followed by centrifugation at 10,000 rpm for 10 min at 4°C. Supernatant was used for MPO estimation and to 0.1 ml of supernatant were added 1.6 mM tetramethylbenzidine and 0.4 ml of H2O2. The tubes were kept for 30 min at room temperature, and the reaction was stopped by adding 0.4 ml of H2SO4. The absorbance was read after 30 min at 450 nm and MPO concentration (μM/mg tissue) was calculated using molar extinction coefficient.

Results are given as mean ± standard error of the mean and a comparison of control and drug-treated groups has been carried out with one-way analysis of variance followed by post-hoc test using Statistical Package for the Social Sciences version 17 (SPSS Inc. Chicago) where P ≤ 0.05 was considered as statistically significant. (*P ≤ 0.05, **P ≤ 0.001 vs. CC and #P ≤ 0.001 vs. NC).

Effect of LPPI on paw edema

Injection of carrageenan in sub-plantar surface of rat paw induced edema formation while injection of NS produced only a marginal increase in paw volume. The edema volume in CC group at 3 h was 0.53 ± 0.02 ml against 0.02 ± 0.01 ml in NC group. Treatment of rats with LPPI produced a marked inhibition of edema formation [Figure 1] and its inhibitory effect was dose-dependent (43% and 64% by 5 and 25 mg/kg doses respectively) while standard antiinflammatory drug diclofenac produced 47% inhibition at 5 mg/kg dose [Figure 2]. Figure 1: Carrageenan induced paw inflammation in rat (a) and the inhibitory effect of LPPI given at a dose of 25 mg/kg (b) 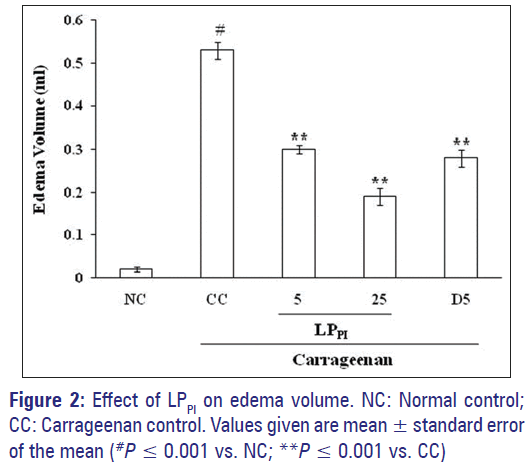 Effect of LPPI on GSH level in paw tissue

Induction of paw inflammation by carrageenan significantly reduced the tissue levels of GSH. The level of GSH in CC group was 159.42 ± 47.18 μg/g tissue as compared to 599.63 ± 76.67 μg/g tissue in NC group. Treatment of rats with 5 and 25 mg/kg doses of LPPI produced a dose-dependent increase in the GSH level. The effect of diclofenac was more pronounced than that of LPPI where the GSH level was 664.85 ± 94.48 μg/g tissue [Figure 3]. 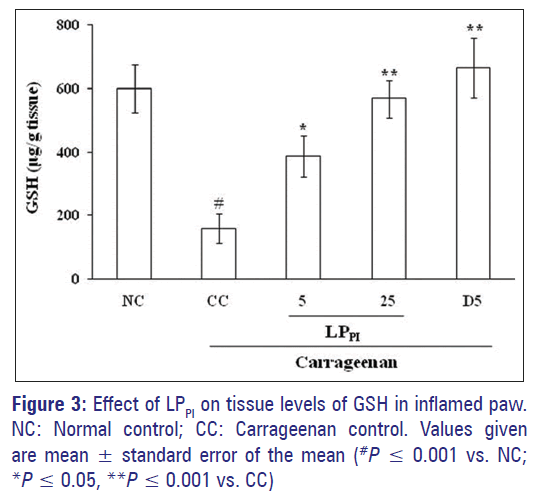 Effect of LPPI on TBARS level in paw tissue

The level of MDA as indicated by TBARS estimation increased in CC group in comparison to NC group (23.90 ± 1.83 in CC group vs. 12.27 ± 0.56 nM/g tissue in NC group). Treatment with LPPI at 5 and 25 mg/kg doses produced a dose-dependent reduction in the TBARS levels and the effect of 25 mg/kg dose of LPPI was more pronounced than that of 5 mg/kg dose of diclofenac [Figure 4]. 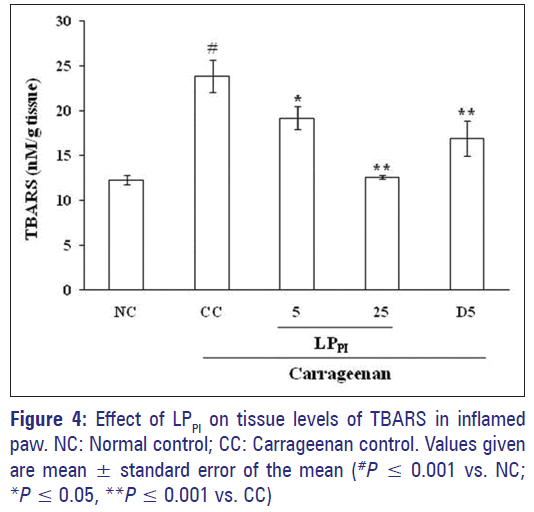 Effect of LPPI on MPO level in paw tissue

The tissue level of MPO, a marker of neutrophil infiltration, in the paw tissue was found to be elevated following carrageenan administration in comparison to NC group. The MPO levels were 85.38 ± 10.16 μM/mg tissue in CC group as compared to 27.65 ± 2.52 μM/mg tissue in NC group. The LPPI significantly decreased the MPO level dose-dependently, and its effect was comparable to that of diclofenac [Figure 5].

Inflammation is the response of the tissue that affords protection against injury and comprises of both vascular and cellular events. It not only involves the release of various preformed mediators, but is also associated with infiltration of leukocytes and generation of various cytokines at the site of injury. Neutrophils reach the site of inflammation first and upon activation they generate oxidative burst leading to accumulation of reactive oxygen and nitrogen species (ROS and RNS) along with lipid peroxidation. [19] In present study, sub-plantar injection of carrageenan induced paw edema where the influx of neutrophils was evident from an increase in the level of MPO, a well-known marker for these cells that catalyzes H2O2-dependent oxidation of halide ions, which are potent oxidizing agents affecting cellular functions. [20] Treatment of rats with LPPI showed a dose-dependent reduction in both edema formation and MPO levels. The LP fraction and its sub-fraction LPPI have earlier been shown to inhibit neutrophilic influx in the peritonitis model by inhibiting neutrophilic rolling and adherence where the role of selectins, integrins, and nitric oxide is well established. [10] The present study substantiates the earlier findings and suggests that inhibition of neutrophil function is an important mechanism by which LPPI inhibits edema formation induced by an inflammagen.

Following recruitment at the site of inflammation, neutrophils release various proinflammatory mediators and generate free radicals, alter the oxidative homeostasis and produce a destructive effect. [19] These free radicals react with membrane phospholipids and generate toxic aldehydes such as MDA, a marker of lipid peroxidation, which results in alteration of membrane function and tissue damage. [21] Acute inflammation induced by carrageenan in present study was found to be associated with a marked increase in the level of MDA and decrease in the level of GSH, a nonenzymatic free radical scavenger, as compared to NC group. Treatment with LPPI normalized the level of these oxidative stress markers thus indicating that LPPI has a protective effect against oxidative damage as also shown by other plant extracts. [22] The antioxidant properties of latex of C. procera have earlier been reported in its nonprotein fractions in various experimental models as well as in protein fraction in arthritis model. [5,8,23] It has also been shown to exhibit in vitro free radical scavenging activity. [24] Thus, the present study shows that the high molecular weight proteins present in C. procera latex produce antioxidant effect and have the potential to treat inflammatory conditions.

The plant C. procera produces latex that has been shown to comprise of proteins possessing antiinflammatory properties. This study reveals that a high molecular weight protein sub-fraction of these proteins significantly inhibits edema formation by exhibiting anti-oxidant effect.