The purpose of the present study to examine the antibacterial and cytotoxic properties of ethanol extract of leaves of Mikania cordata (Burm.f.) B.L. Robinson. To determine antibacterial activities, the extract was tested against four Gram positive and six Gram negative bacteria at three concentrations (500, 800, 1000 μg disc-1) through disc dif- fusion method. The extract showed moderate antibacterial actions and that was in- creased by increasing the concentration of the sample. The maximum antimicrobial potential was obtained against Shigella flexneri and no sen sitivity was found for Klebsiella sp. Comparatively gram-positive bacteria demonstrated more susceptibility to the extract than gram-negative bacteria. Cytotoxic property of the sample was done using Brine shrimp lethality bioassay where it did not show noticeable toxicity. So, our present study reveals that the leaves extract of M. cordata possess considerable antibacterial properties along with lesser amount of cytotoxicity.

Infectious diseases have been, in the past and continue to remain, a leading cause of morbidity, disability and mortality in the world. Approximately 15 million people die each year due to infectious diseases – nearly all live in developing countries [1]. Their control is a constant challenge that faces health workers and public health officials in both industrialized and developing countries. Only one infectious disease, smallpox, has been eradicated and stands as a landmark in the history of the control of infectious diseases. The international community is now embarked on the path to eradicate poliomyelitis and dracunculiasis (guinea worm infection) by the close of this century. Other infectious diseases, such as malaria and tuberculosis, have foiled eradication attempts or control efforts and are re-emerging as increasing threats in many countries. Some infectious diseases, such as tetanus, will always be a threat if control measures are not maintained. Drugs that once seemed invincible are losing their effectiveness for a wide range of community-acquired infections, including tuberculosis, gonorrhoea, pneumococcal infections (a leading cause of otitis media, pneumonia, and meningitis), and for hospital-acquired enterococcal and staphylococcal infections [2]. Indiscriminate and unconcerned use of antibiotics has led to increased microbial resistance. Consequently, newer agents have been brought in at increased economic costs to the patient but they too have become inefficacious in due course and pose a great threat to human health in world. So, noble, emerging and re-emerging infectious diseases have become a focus for the development of new cost-effective drug in both industrialized and developing countries.

Nature has been a source of medical treatments for thousands of years and today plant based systems continue to play an important role in the primary health care of 80% of the world’s population [3,4]. According to a study by Grifo and collegues, 84 of a representative 150 prescription drugs in the United States fell into the category of natural products and related drugs [5]. They were prescribed predominantly as anti-allergic/pulmonary/respiratory agents, analgesics, cardiovascular drugs, and for infectious diseases. The increasing prevalence of multidrug resistance in pathogenic microorganisms, as well as, undesirable side effects of certain antibiotics have triggered immense interest in the search for new antimicrobial drugs of plant origin. Common side effects are allergic reaction or toxic reactions or mutagenic substances. Therefore, medicinal plant extracts offer considerable potential for the development of new agents effective against infections currently difficult to treat [6]. As natural products have been elaborated within living systems, they are often perceived as showing more “Drug likeness” and biological friendliness than totally synthetic molecules,” making them good candidates for further drug development [7-9]. In continuation of this effort, we study antibacterial potential of Mikania cordata and its cytotoxic properties.

The medicinal plant, Mikania cordata (Burm. f.) B. L. Rob is also known as heartleaf hempvine belongs to the family Asteraceae. It is perennial, fastgrowing, creeping or twining vine with ribbed stems 3-6 m long; leaves opposite, heart-shaped. The plants are found throughout the tropical regions of Asia, Africa and South America.

It is widely used as traditional medicine against gastric ulcer and a variety of other diseases. There are several scientific reports on different parts of the plant. Mandal PK et. al. (2006) reported that the root extract of the plant possessed hepatoprotective activity [10]. The leaves of Mikania species are used in folk medicine have antispasmodic, antiulcerogenic and antirheumatic agents [11,12]. The plant is also used to treat asthma, respiratory problems and infections. Haque et al., (2011) reported that among three fractions (methanol, methelene chloride and n-hexane) of aerial parts of the Mikania cordata, methelene chloride fractions showed maximum antimicrobial activity [13]. But there is no scientific report on antibacterial activity of ethanol extract of leaves of the plant. So, the aim of our ongoing research is to investigate the antibacterial and cytotoxic properties of the ethanol extract of Mikania cordata leaves.

Ethanol extract of Mikania cordata leaves was used in the present study. The matured leaves were collected in the month of October 2010 from Chittagong, Bangladesh. The leaves was dried under shade and pulverized in a mechanical grinder. The powder was extracted with ethanol. The extracted juice was filtered by using a clean cloth and then filter paper. The extract was concentrated first in Rotary vacuum evaporator and then on water bath. The extract was then kept in a refrigerator for antimicrobial and cytotoxic properties.

The disc diffusion method was used to test antibacterial activity against ten bacteria [14]. The antimicrobial activity of ethanol extract of Mikania cordata leaves were determined at three concentration (500, 800, 1000 μg disc-1). Solutions of known concentration (10 mg/ml) of the test sample were made by dissolving measured amount of the samples in calculated volume of solvent. Dried and sterilized filter paper discs (5.5 mm diameter) were then impregnated with known amounts of the test substances using micr opipette. Discs containing the test material were placed on nutrient agar medium uniformly seeded with the pathogenic test microorganisms. Standard antibiotic discs (Kanamycin 30 μg disc-1) and blank discs (impregnated with solvents) were used as a positive and negative control. These plates were then kept at low temperature (4°C) for 1 h to allow diffusion. There was a gradual change in concentration in the media surrounding discs. The plates were then incubated at 37°C for 12 h to allow growth of the organisms. The test materials having antibacterial activity inhibited the growth of the microorganisms and a clear, distinct zone of inhibition was visualized surrounding the medium. The antibacterial activity of the test agent was determined by measuring the diameter of zone of inhibition expressed in millimeter. The experiment was carried out three times and the mean of the reading was taken.

Brine shrimp lethality bioassay is widely used in the bioassay for the bioactive compounds [15,16]. Here simple zoological organism (Artemia salina) was used as a convenient monitor for the screening. The eggs of the brine shrimp were collected from an aquarium shop (Chittagong, Bangladesh) and hatched in artificial seawater (3.8% NaCl solution) for 48 h to mature shrimp called nauplii. The cytotoxicity assay was performed on brine shrimp nauplii using Meyer method. The test sample (extract) were prepared by dissolving them in DMSO (not more than 50 μL in 5 mL solution) plus sea water (3.8% NaCl in water) to attain concentrations of 3.125, 6.25, 12.5, 25, 50, 100, 200 and 400 μg/ml. A vial containing 50 μL DMSO diluted to 5 mL was used as a control. Standard vincristine sulphate was used as positive control. Then matured shrimps were applied to each of all experimental vials and control vial. After 24 h, the vials were inspected using a magnifying glass and the number of survived nauplii in each vial was counted. From this data, the percent (%) of mortality of the brine shrimp nauplii was calculated for each concentration using the following formula:

where, Nt = Number of killed nauplii after 24 hrs of incubation,

The antibacterial activities of the extract obtained from the plant under study by the disc diffusion method are shown in Table 1. The extract of the plant screened at three concentration (500, 800, 1000 μg disc-1) against four Gram positive and six Gram negative bacteria and showed various levels of antimicrobial activities with the different zone of inhibition. Larger zone of inhibition was obtained with the increasing concentration of the sample and all tested microorganisms were more sensitive at 1000 μg disc-1. So, the antimicrobial activity is directly proportional to the concentration of the extract. At 500 μg disc-1, the extract showed no sensitivity against Bacillus subtilis, Bacillus megaterium, Shigella dysenteriae, Pseudomonas aeruginosa and Klebsiella sp. The extract showed maximum inhibition against Staphylococcus aureus and Shigella flexneri whereas no activity was found against Klebsiella sp at all three concentrations. Kanamycin disc (30 μg/disc) was used as standard whose zone of inhibition ranged from 25-38 mm. No zone of inhibition was found for negative control disc. 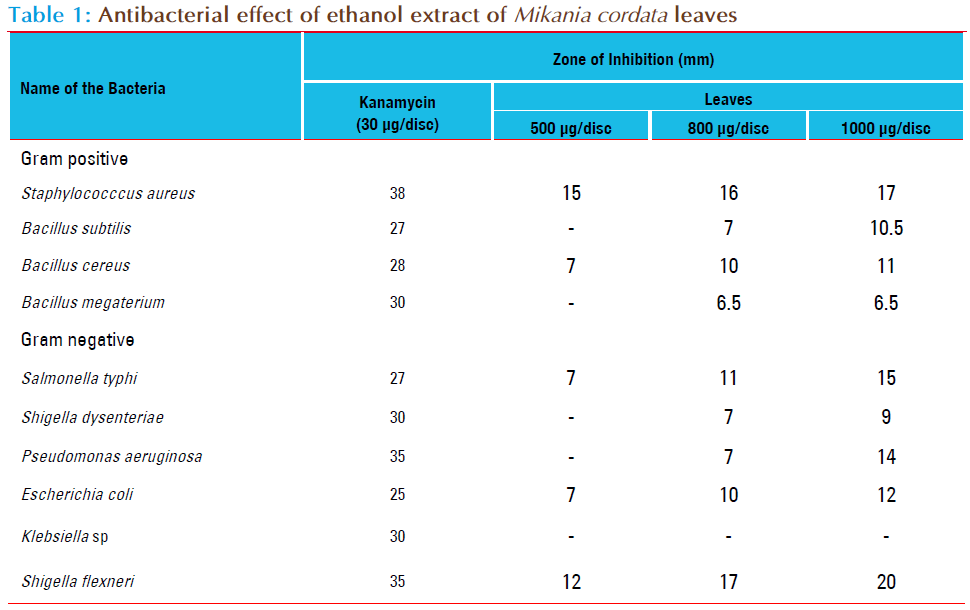 Following the procedure of Meyer, the lethality of the crude extract of Mikania cordata leaves to brine shrimp was determined on Artemia salina after 24 h of exposure the samples, the positive control and vincristine sulphate. This technique was applied for the determination of general toxic property of the plant extract. From the Figure 1, we have observed that the LC50 value of the extract was 116.74 μg/ml and that for standard vincristine sulphate was 9.5 μg/ml. No mortality was found in the control group, using DMSO and sea water.

Traditional and alternative medicine is extensively practiced in the prevention, diagnosis, and treatment of various illnesses. It has regained public attention over the past 20 years as this type of medicine is easily accessible in some regions. A postulation denoted that by 2010, at least two-thirds of Americans will opt for alternative therapies [17]. The non prescription use of medicinal plants is cited today as an important health problem, in particularly their toxicity to the kidney [18]. So, if the plant extract found to show significant antimicrobial activities must take into account acceptable levels of toxicity.

The results obtained in our present study indicated that the crude ethanol extract of Mikania cordata leaves showed better antibacterial activities at higher concentrations against both the Gram positive and Gram negative bacteria. The extract showed maximum and minimum activities against Shigella flexneri and Klebsiella sp respectively; both of which are Gram negative bacteria. All bacteria except Klebsiella sp showed better sensitivity to the plant extract at 800 and 1000 μg/disc while no activity was found against five bacteria among ten at 500 μg/disc concentrations. The extract did not cause any apparent in vitro toxicity in brine-shrimp lethality bioassay comparing standard drug vincristine sulphate. But the extract demonstrated antibacterial action at higher concentration that may cause hazardous effect to the patient. So, further studies are needed to understand the mode of action of the individual compounds after separation from the extract and this may lead to develop a new antimicrobial agent in future.