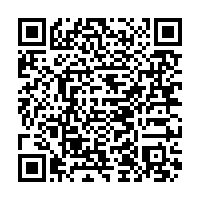 There is an increased evidence for the participation of free radicals in the etiology of various diseases like cancer, diabetes, cardiovascular diseases, autoimmune disorders, neurodegenerative diseases, aging, etc. [1]. A free radical is defined as any atom or molecule possessing unpaired electrons. The primary oxygen derived free radicals are superoxide anion (O2·), hydroxyl (OH·), hydroperoxyl (OOH·), peroxyl (ROO·) and alkoxyl (RO·) radicals and non free radicals are hydrogen peroxide (H2O2), hypochlorous acid (HOCl), ozone (O3) and singlet oxygen (1O2). These reactive intermediates are collectively termed as reactive oxygen species (ROS). Free radicals can cause a wide range of toxic oxidative reactions like initiation of the peroxidation of the membrane lipids leading to the accumulation of lipid peroxides, direct inhibition of mitochondrial respiratory chain enzymes, fragmentation or random cross linking of molecules like DNA, enzymes and proteins which ultimately leads to cell death [2]. ROS can be formed in living organisms by both endogenous and exogenous sources. Endogenous sources of free radicals include normal aerobic respiration, peroxisomes and stimulation of polymorphonuclear leucocytes and macrophages. The exogenous sources include ionizing radiation, tobacco smoke, pollutants, pesticides and organic solvents [3].

Antioxidants are agents which scavenge the free radicals and prevent the damage caused by them. They can greatly reduce the damage due to oxidants by neutralizing the free radicals before they can attack the cells and prevent damage to lipids, proteins, enzymes, carbohydrates and DNA [4]. Antioxidants can be classified into two major classes i.e., enzymatic and non-enzymatic. The enzymatic antioxidants are produced endogenously and include superoxide dismutase, catalase, and glutathione peroxidase. The non-enzymatic antioxidants include tocopherols, carotenoids, ascorbic acid, flavonoids and tannins which are obtained from natural plant sources [5]. A wide range of antioxidants from both natural and synthetic origin has been proposed for use in the treatment of various human diseases [6]. There are some synthetic antioxidant compounds such as butylated hydroxytoluene, butylated hydroxyanisole and tertiary butylhydroquinone which are commonly used in processed foods. However, it has been suggested that these compounds have shown toxic effects like liver damage and mutagenesis [7,8]. Flavonoids and other phenolic compounds of plant origin have been reported as scavengers of free radicals [9,10]. Hence, nowadays search for natural antioxidant source is gaining much importance.Therefore, attempt has been made to evaluate antioxidant potential of selected Indian medicinal plants viz-, Balanites aegyptiaca and Cissus quadrangularis.

Balanites aegyptiaca (Zygophyllaceae) commonly known as ‘Desert Palm’ is widely grown in African continents, middle-east, south Asia. The plant is also known as ‘Pharmacy tree’ because all parts of the plant are used for medicinal purposes [11]. Chapaganin et al., (2005) [12] observed that the plant is used for human consumption and cosmectics. Cissus quadrangularis (Vitaceae) commonly known as Hadjod is used in Ayurveda in Calciferous process, in back, spine, bones. [13,14]

The plant materials were collected in August 2007 from the adjacent areas of Jaipur district, and were taxonomically identified by Roop Singh ji, a plant taxonomist. A voucher specimen (Balanites aegyptiaca- RUBL20252, Cissus quadrangularis-RUBL20253) has been preserved in the departmental herbarium, Department of Botany, University of Rajasthan, Jaipur, India.

The air-dried powdered leaves of B.aegyptiaca, C. quadrangularis (100 g) were extracted with 450 ml of ethanol mixture using a mechanical shaker for 4 h. The resultant extract was concentrated under reduced pressure to yield a residue

The peroxy radical scavenging activity was determined by thiocyanate method using ascorbic acid (50-800 μg/ml) as standard [15]. Increasing concentration of the fractions (50-800 μg/ml) in 0.5 ml of distilled water was mixed with 2.5 ml of 0.02 M linoleic acid emulsion (in 0.04 M phosphate buffer pH 7.0) and 2 ml phosphate buffer (0.04M, pH 7) in a test tube and incubated in darkness at 37°C. At intervals during incubation, the amount of peroxide formed was determined by reading the absorbance of the red colour developed at 500 nm by the addition of 0.1 ml of 30% ammonium thiocyanate solution and 0.1 ml of 20 mM ferrous chloride in 3.5% hydrochloric acid to the reaction mixture. The percentage scavenging activity was calculated and was compared with the standard, ascorbic acid.

The reducing power was investigated by the Fe3+- Fe2+ transformation in the presence of the fractions as described by Fejes et al., (2000) [16]. The Fe2+ can be monitored by measuring the formation of Perl’s Prussian blue at 700 nm [17]. One ml of the fraction (50-800 μg/ml), 2.5 ml of phosphate buffer (pH 6.6) and 2.5 ml of 1% potassium ferricyanide were incubated at 50°C for 30 min and 2.5 ml of 10% trichloroacetic acid was added to the mixture and centrifuged for 10 min at 3000g. About 2.5 ml of the supernatant was diluted with 2.5 ml of water and shaken with 0.5 ml of freshly prepared 0.1% ferric chloride. The absorbance was measured at 700 nm. Ascorbic acid (50-800 μg/ml) was used as the standard. All tests were performed in triplicate and the graph was plotted with the average of the three determinations.

Free radicals are known to play a definite role in a wide variety of pathological manifestations. Antioxidants fight free radicals and protect us from various diseases. They exert their action either by scavenging the reactive oxygen species or protecting the antioxidant defence mechanisms.

The amount of formed peroxides was measured by the thiocyanate method. The fractions were incubated with linoleic emulsion in dark at 37°C and the amount of peroxides was determined spectro-photometrically by measuring the absorbance at 500 nm [19]. A decrease in absorbance indicated the antioxidant activity of the fractions which might be due to the inactivation of the free radicals and the presence of flavonoid like phytochemicals.

As seen in fig.1 there is no clear difference of antioxidant activity between the control and the sample containing 200μg extract. However peroxy radical scavenging activity is suppressed about 6h in the presence of 400μg extract, and after that it begins to increase. In the presence of 1000μg extract or 500μg ascorbic acid, the peroxidation process is delayed for about 12h. 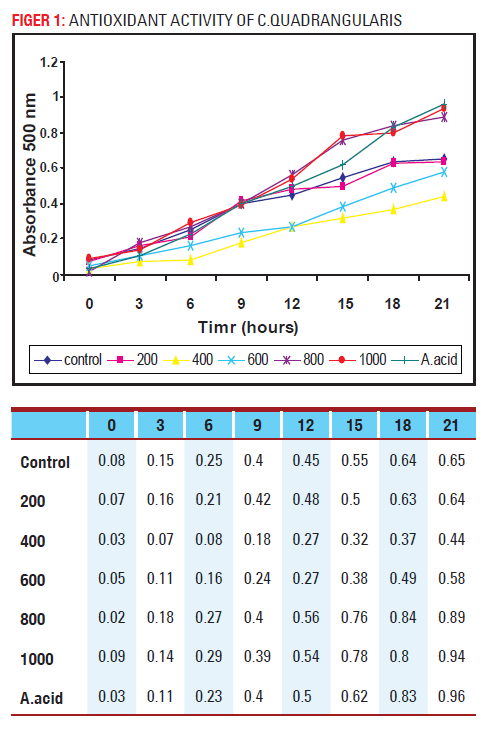 As seen fig 2, the peroxy radical scavenging activity is suppressed about 6h in the presence of 400μg extract, and after that it begins to increase. In the presence of 1000μg extract or 500μg ascorbic acid, the peroxidation process is delayed for about 12h.it shows similar pattern of activity but possess less as compare to Hadjod. 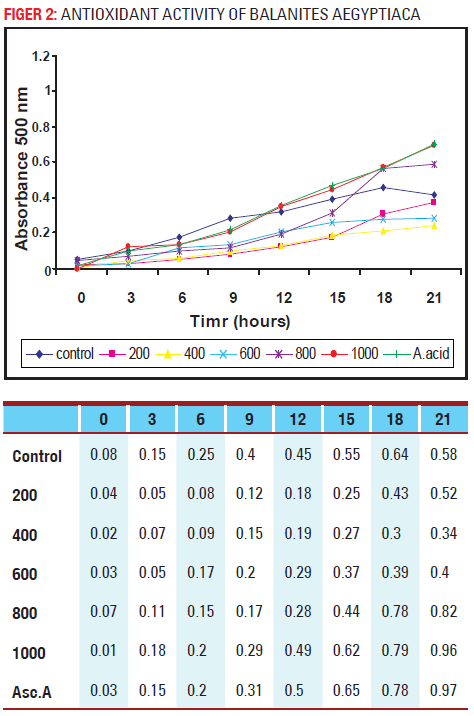 Unlike antioxidant activity, the reducing power of Cissus quadrangularis was lowest as compare to the other one i.e. Balanites aegyptiaca. Although. Ascorbic acid was also more effective than the two.

Based on the results obtained, it may be concluded that selected plant extract showed strong antioxidant activity, reducing power ability. 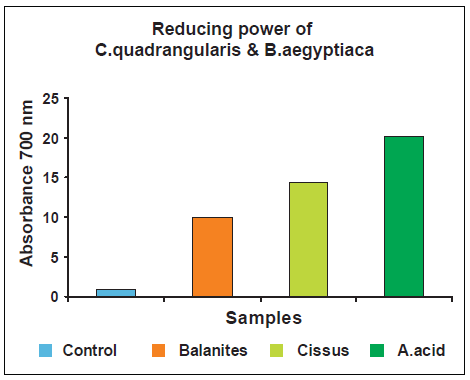